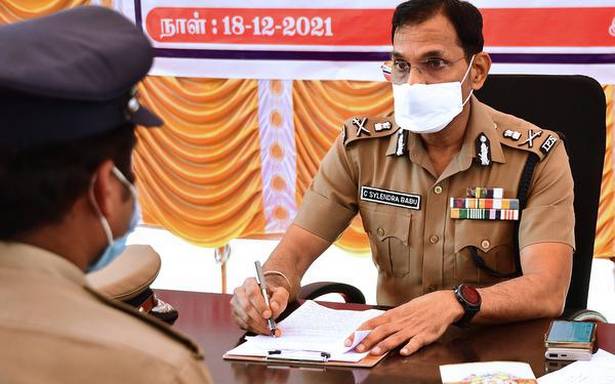 A total of 843 petitions were received at the grievances redress meeting held for police personnel under the ‘Ungal Thuraiyil Muthalamaichar’ (Chief Minister in your department) programme here on Saturday.

Director General of Police C. Sylendra Babu received the petitions from police personnel working in the police districts in the west zone, police city commissionerates of Coimbatore, Tiruppur and Salem at the meeting held on the Police Recruits School campus.

A release said 1,340 petitions were received from police personnel and office staff at the office of the DGP between July and November this year. Of the 1,058 mercy petitions received, punishments given to 366 petitioners were revoked and 51 personnel were reinstated into the service. Punishment of 164 petitioners were commuted. A total of 1,353 police personnel were given transfers to the districts of their choice, it said.

It said those police personnel, whose grievances were not redressed by the DGP, would present their petitions to the Chief Minister in person.

Across the State, a total of 5,236 petitions from police personnel from 38 police districts and seven commissionerates were received under the ‘Ungal Thuraiyil Muthalamaichar’ programme, the release said.