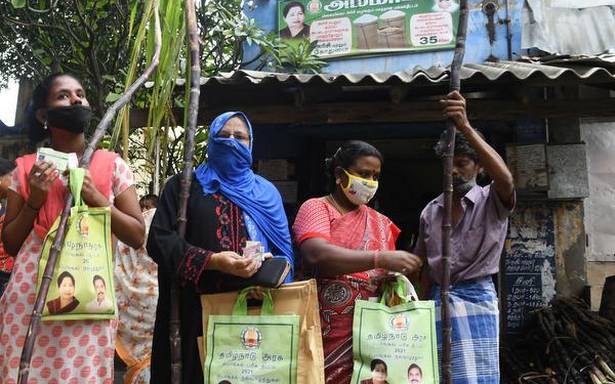 Residents made a beeline across the ration shops in the district as distribution of Pongal cash gift hampers began on Monday.

An official from the district administration said the Pongal gift hampers would be distributed to around 8.88 lakh rice card holders at 1,398 ration shops in the district. Around ₹222 crore had been allocated for the district for giving the cash assistance with the gift hamper. Each card holder would get ₹2,500. The hamper contains 1 kg each of raw rice and sugar, sachets of cashew nuts, raisins and cardamom and a sugar cane.

Distribution of tokens for collecting the gift hamper was completed last week. The gift hampers would be given during allotted time slots to avoid crowding at ration shops, he said.

Revenue Minister R. B. Udhayakumar, along with Collector T. Anbalagan, distributed the Pongal gift hampers to beneficiaries at Usilampatti, Sholavandan and Peraiyur blocks on Monday.