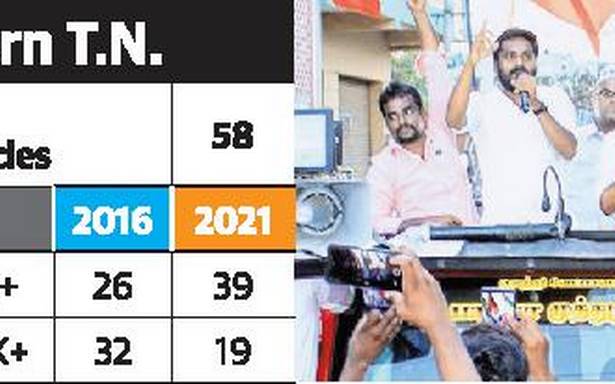 However, it also suffered some shock defeats in the region

Voters in south Tamil Nadu have helped candidates of the DMK-led Secular Progressive Alliance win or establish leads in 41 of the 58 constituencies. However, the DMK also suffered some shock defeats like that of former Minister Suresh Rajan in Nagercoil to M.R. Gandhi of the BJP.

Though the region gave the party its highest victory margin of over 1.3 lakh votes in Athoor where its senior leader I. Periasamy defeated the PMK candidate, the DMK could not get the better of Deputy Chief Minister and AIADMK coordinator O. Panneerselvam. Nonetheless, Thanga Tamil Selvam put up a tough fight to the Theni veteran in Bodinayakkanur.

Likewise, the DMK was unable to stop former Minister Nainar Nagendran of the BJP, who defeated its candidate Lakshmanan in Tirunelveli.

The AIADMK, which had held seven out of 10 seats in Madurai district, retained only five. DMK Madurai Central candidate P.T.R. Palanivel Thiagarajan retained his seat by over 33,000 votes.

Leading the DMK battle in Virudhunagar district, veteran politician K.K.S.S.R. Ramachandran and former Minister Thangam Thennarasu ensured that the party won in six of the seven seats. The AIADMK won in Srivilliputhur, where Congress candidate Madhava Rao died after polling.

In Ramanathapuram district, the DMK won in all four seats. The DMK contested in the Ramanathapuram seat after 25 years; its district secretary Katharbatcha Muthuramalingam defeated BJP senior leader Kuppuram. In Tiruvadanai, the Congress won hands down. Former Minister Raja Kannappan of the DMK returned to the Assembly from Mudukalathur, defeating his AIADMK rival Keerthika Muniasamy.

Interestingly, the Naam Tamilar Katchi’s candidate in Paramakudi polled over 10,000 votes, though the DMK won the seat. Similarly, AMMK candidate V.T. Anand of Tiruvadanai polled over 30,000 votes, spoiling the pitch of K.C. Animuthu of the AIADMK.