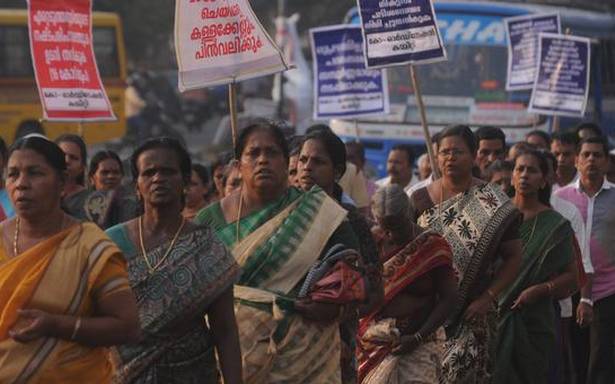 ‘Compensation and rehabilitation should take precedence over eviction for SilverLine project’

“No one should ever give their land for development projects, and if they do, they suffer our fate,” rued 82-year-old Sreedevi last year on the 13th anniversary of the forceful eviction of 10 families at Moolampilly for the rail-road connectivity of the Vallarpadam International Container Transshipment Terminal (ICTT).

Just over five months later, she died without ever being rehabilitated. She was among the 32 evictees to face similar fate. Unable to reconcile to the reality, some of them had even taken their lives.

Sreedevi would be turning in her grave, as the State government tries to win over opponents to the proposed SilverLine semi-high-speed rail project by dangling the carrot of ₹13,265 crore compensation package.

“Having gone through a nightmarish 13 years since our forceful eviction for a negligible compensation and without proper rehabilitation, we feel absolute contempt watching the government trying to take another set of people for a ride in the name of development. We just want to tell them not to be fooled by the announcements and never to leave without first receiving the compensation and rehabilitation,” said Sanoob Antony whose house was among the first to be levelled by an earth mover at Moolampilly on the fateful day. Shattered, his father turned alcoholic and eventually succumbed to it, while his mother has been an emotional wreck since then.

The compensation received for his six cents was just about enough to buy two cents at Chittoor, while the rehabilitation plot given to him is unfit for construction without piling for which he hardly has the means. “One member each from the evicted families was guaranteed a job at ICTT believing which I did a course in crane operation. For the last nearly 14 years I have been waiting for the job,” fumed the 35-year-old who now makes a living as a crane operator on call.

Mary Francis, a 72-year-old evictee from Moolampilly who continues to live in a rented house, also urged those likely to be affected by the SilverLine project to learn lessons from the experience of Vallarpadam evictees. “A life of debt is what is in store for you. You will be stripped of your life’s savings leaving you in no shape to rebuild physically, mentally, or financially. Our 24 cents, house, and a workshop were hammered down, and we were given six cents in exchange,” she said.

Ms. Francis still shudders how her grandchild Godson was still sleeping inside the house when workers turned up with the police to pull down her house. Godson is now 14 years old.

V.P. Wilson, a 56-year-old, was uprooted from the industrial belt of Eloor and given a plot at Kothad disrupting his livelihood. “The promise of four and 10 times the market value for the land to be taken over has little meaning, if the government has no intent to act on it. Multiple Government Orders and court verdicts for the implementation of our rehabilitation package remain ignored,” he said.

Francis Kalathungal, general convener, Moolampilly Coordination Committee, said rehabilitation should take precedence over eviction, and a rehabilitation officer should also be appointed with sufficient powers. “There should be a comprehensive social impact assessment, and title deeds should be transferable while not defeating the purpose of rehabilitation. Title deeds given to Vallarpadam evictees were non-transferable for 25 years, and financial institutions denied them loans citing that,” he said.