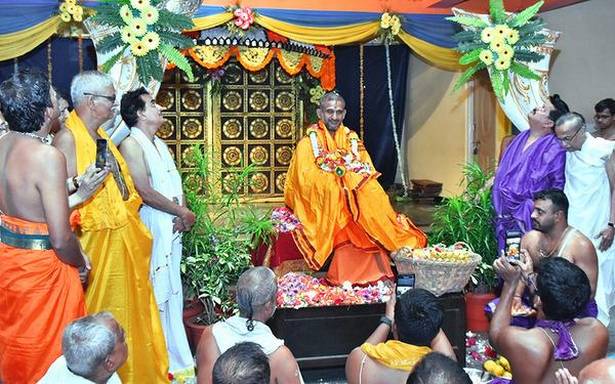 The Sri Ram Janm Bhoomi Tirth Kshetra Trust on Tuesday categorically rejected the charge of Nazi style of profiling of people as to who has not donated for Ram Temple construction made by the former Chief Minister H.D. Kumaraswamy on Monday.

Mr. Kumaraswamy had made the allegations at a press conference in Shivamogga and tweeted the same later. Sri Vishwa Prasanna Tirtha Swamiji of Udupi Pejawar Mutt, who is one of the trustees of the trust, rejected the charge outright and urged Mr. Kumaraswamy not to make any accusations without any semblance of proof.

Stating that it was not wrong to level accusations, the swamiji told presspersons in Udupi that making accusations without any proof was completely wrong. He said that neither the trust nor the Rashtriya Swayamsevak Sangh had given any such instructions to volunteers who were collecting donations for the construction of the Ram Temple.

Sri Vishwa Prasanna said that people’s response to the fund collection has been overwhelming to the extent of causing shortage of coupons and receipt books.

He said that if at all a list of households was prepared, it was to help volunteers to return to those houses later and collect funds with proper receipt. The former Chief Minister has not shown any proof that the list was prepared with the intent that he said it was for.

Responding to the former Chief Minister Siddaramaiah’s reported statement that he would not donate for the temple construction, Sri Vishwa Prasanna said that the trust did not force anyone to make donation.

He refused to react to Mr. Siddaramaiah’s charge that the Ram Temple site was under dispute and added that the Supreme Court had already settled the issue.