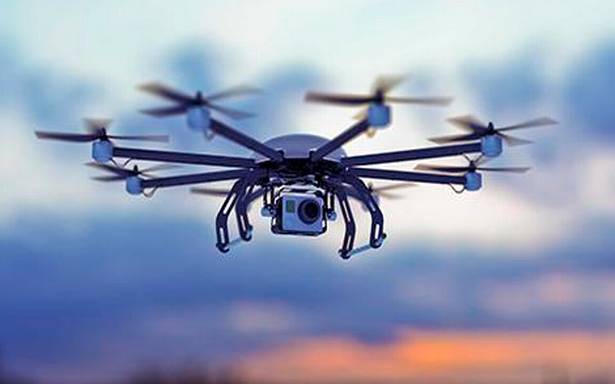 Undetected by radars, they are used to smuggle drugs and weapons, and conduct aerial surveillance

Drones were used for the first time to drop explosive devices, triggering blasts inside the Air Force Station’s technical area in Jammu in the early hours of Sunday. However, over the past two years, drones have been deployed regularly by Pakistan-based outfits to smuggle arms, ammunition and drugs into Indian territory.

“The Air Force Station is about 14 km from the border. Although the local police suspect that the drones were flown from across the border, it is yet to be established beyond doubt. High-quality explosives were apparently used,” said an official in the know of the developments.

“Drones fly low and therefore cannot be detected by any radar system…preliminary findings suggest that the target was to damage a helipad inside the station,” he said.

The official said the incident could be an extension of the trend Pakistan-based syndicates using drones to smuggle drugs and weapons into the Indian side, apart from conducting aerial surveillance.

According to government figures, 167 drone sightings were recorded along the border with Pakistan in 2019, and in 2020, there were 77 such sightings.

In January 2021, the Jammu & Kashmir Police caught two persons while they were picking up a consignment of 16 grenades, two AK-74 rifles, nine AK magazines, a pistol and ammunitions, which were smuggled via drones.

In another case, the Punjab Police seized 11 grenades that were air-dropped from Pakistan in December 2020.

In October 2020, the Army shot down one drone along the Line of Control in the Keran sector of J&K.

A case of dropping arms was reported when the Border Security Force shot down a UAV (unmanned aerial vehicle) near Rathua village in the Hira Nagar sector of Jammu on June 20 last year. The drone was transporting an American-made M4 rifle, several grenades and ammunitions.

In yet another case, in the intervening night of June 3 and 4, 2020, a consignment of weapons was dropped through three drone sorties outside Dharamkot Randhawa in Punjab’s Gurdaspur. The consignment included two MP-9 guns, six pistols and ₹4 lakh in counterfeit currency.

It later turned out that the consignment had been sent via drone at the instance of Pakistan-based Khalistan Ziindabad Force chief Ranjeet Singh Neeta.

“The use of drones by Pakistan-based elements has been a major cause of concern. All tech-based solutions are being explored to counter it. Anti-drone jammers cannot be that effective in the border areas, but they can be deployed at security sensitive installations to prevent such attacks in future,” the official said.

Weaponised drones were first used by the Islamic State in northern Iraq in 2016 and then in Syria.

Another emerging challenge for the security forces is the increasing use of improvised explosive devices. On Sunday, one such device weighing about 5 kg was also found by the Jammu Police, raising suspicion over the involvement of the same group in both the cases.