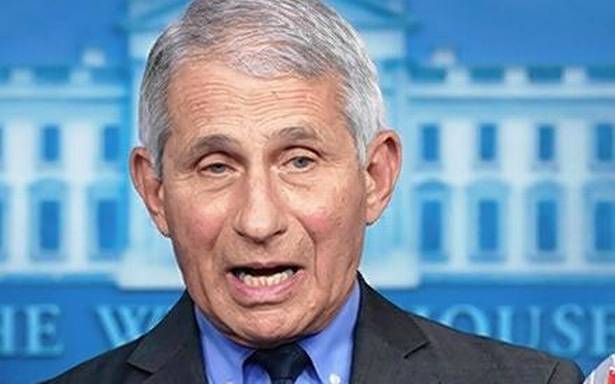 India could face another coronavirus surge if the population is “lulled into complacence” over the current decline in cases, warned Principal Scientific Advisor (PSA) K. VijayRaghavan, as U.S. Presidential Medical Advisor Anthony Fauci said that a key lesson was that “evidence-based” guidance was necessary from health officials and the political leadership of the country. Both advisors appeared on a special programme on Indo-U.S. Health Cooperation organised by the Washington-based U.S.-India Strategic Partnership Forum.

Dr. Fauci, who is the head of the U.S. National Institute of Allergy and Infectious Diseases, said that India and the U.S. must continue to collaborate on research related to SARS-CoV-2 as well as vaccines and adjutants.

“We also are eager to involve Indian investigators and sites in global clinical trials to evaluate the safety and efficacy of various COVID-19 therapeutics,” he added, referring to the need to step up joint research into the treatment of COVID-19 patients.

Speaking about lessons learned by the United States from the pandemic, Dr. Fauci said that it was necessary to implement “well designed and validated scientific approaches to guide effective public health and clinical practice” . The U.S. has seen the highest number of COVID-19 cases (more than 34 million) in the world and the highest number of deaths (611,000), India ranks second on cases (more than 28 million) and third on deaths (338,000), globally.

“International cooperation and collaboration are essential to advance scientific discovery, and to manage global health threats,” said Dr. Fauci. “We must address inequities in our health systems, so that future epidemics are not a burden primarily borne by disadvantaged populations. Finally, we all need to make sure that the public receive accurate, evidence-based guidance from health officials, and political leadership,” he added.

When asked how realistic were the government’s projections that it would complete most of its vaccination goals by the end of 2021, Dr. VijayRaghavan said that the government had an “ambitious programme” and that logistics for administering the vaccine were being put into place.

“This is an unusual adult vaccination programme, which needs to vaccinate substantial parts of a population that requires a combination of logistics, which are in place, and programmatic distribution of supplies, which are wrapping up in June, July, August, September,” he claimed, adding that the government would rely on Serum Institute of India’s Covishield, Bharat Biotech’s Covaxin and Russia’s Sputnik and “other vaccine purchases” for the “kind of massive deployment” that is required. U.S. companies that are still in negotiations with the government on regulatory issues and contract negotiations with Indian companies and U.S. majors Pfizer, Moderna and Johnson & Johnson are also expected to help provide vaccines by the end of the year.

Speaking about the possibility of another wave of the pandemic, the PSA said that while health infrastructure can be increased 40-50% in an emergency, it was hard to double or triple resources when cases rise exponentially, as they had done over the past month.

“During the first rise in COVID infections in 2020, what we saw is that as infections rose, so did immunity — and others in the population took cautionary steps. So there were less opportunities for infection to spread, and the numbers began to drop. Now once again, new opportunities were given because levels of caution dropped. More people got infected, and we will face this rise until cautionary steps and infection-based immunity grows again,” Dr. VijayRaghavan explained, advocating the continued use of masks and other precautions.