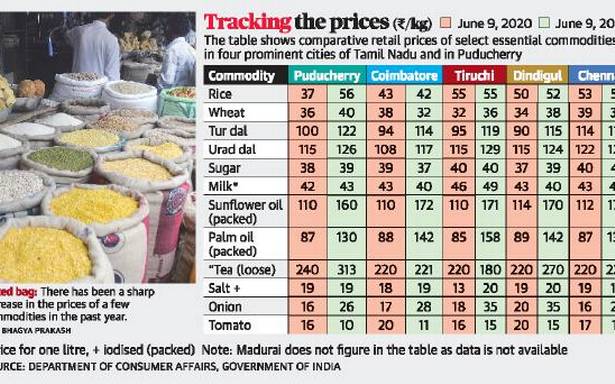 The prices of edible oil and tur dal have showed a sharp increase over the past year while those of rice and wheat have recorded a subdued rise, according to a comparative study of prices of select essential commodities as reported in different places of Tamil Nadu, besides Puducherry.

According to the data furnished by the Government of India’s Department of Consumer Affairs, the prices of edible oil (only two variants — sunflower oil and palm oil — are chosen for the study) have gone up by about ₹50 a kg. In the given four cities of Tamil Nadu, the prices of sunflower oil, widely used by the middle class, have increased by about ₹60 a kg and in Puducherry, the difference is ₹50 a kg. Similarly, palm oil, used by the poor, has seen a hike of ₹47 a kg in Puducherry. As far as Tamil Nadu is concerned, the product has become dearer by at least ₹50 a kg. As for tur dal, the rise has been in the range of 20% to 25% except in Chennai, where the difference is marginal. As regards urad dal, the hike has not been that perceptible.

Barring Puducherry, rice has remained stable in Tamil Nadu. The position of wheat is similar in the State and even in the Union Territory too. In fact, in Coimbatore, the price of wheat has seen a downward trend – a decline of ₹6 a kg.

A veteran administrator said that the situation in the State is part of the all-India feature as the country has been meeting, through imports, a large chunk of requirements of edible oil and pulses. The price increase of edible oil is sharper than that of pulses due to two reasons — a jump in international prices and a higher import duty. The Centre is considering the question whether it can reduce the duty so that there will be a fall in the prices. However, there is another view that the reduction might lead to further increase in the prices internationally in view of the anticipated higher demand from India.

K.R. Shanmugam, director of the Madras School of Economics, said that the prices of egg and non-vegetarian food too [both of which are not included in the list of commodities being monitored by the Central department] have witnessed a sharp rise over the past year.

What the administrator and the economist agree on is that the conventional rules of supply and demand dynamics are not applicable at present on account of the lockdown. Despite the transportation of essential commodities being exempted from the lockdown, their movement and availability are not completely insulated from the restrictions. Consequently, this has a bearing on their prices.

A senior official in the State government said that the government has got the Price Stabilisation Fund to manage any situation.

Besides, through the special public distribution system, palm oil and tur dal are being provided at subsidised rates, he said.