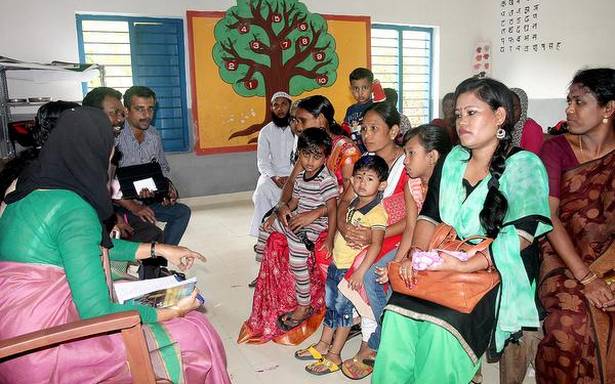 1,250 students in classes 1 to 7 in 40 schools benefited from Roshni project the previous year

The much-appreciated ‘Roshni’ project for educational upliftment of children of migrant workers in Ernakulam has hit a roadblock.

Forty education volunteers, who remain the backbone of the project, have not received their monthly salary of ₹10,000 each from November last to March this year.

About 1,250 migrant children enrolled in classes 1 to 7 across 40 government and aided schools in the district had benefited from the programme amidst the pandemic situation in the previous academic year.

The innovative project was launched by the Ernakulam district administration in 2017 using the corporate social responsibility fund made available by Bharat Petroleum Corporation Ltd. The Roshni project had found mention in the Governor’s policy address last year. The government had stated that it would be extended across the State.

“About 20 lakh is required to clear the salary arrears of the 40 educational volunteers since November 2020. We had provided their salary for the first five months of the previous academic year using the balance fund available from the academic year 2019-20,” according to the people associated with the programme.

“A revised project proposal incorporating the audio-visual components in the online mode was submitted before the district administration in August last. The bills and vouchers of the expenses incurred up to March this year were also forwarded to the District Collector for approval in April,” said officials at the Office of the Deputy Director of Education, Ernakulam.

The heads of the schools partnering in the programme had sought the help of the educational volunteers to interact with the migrant children in their respective native languages after the online sessions began on June 1. However, the trained volunteers have not yet come on board officially in view of the doubts over the fate of the project. They were instrumental in creating interactive and adaptive online modules after watching the classes aired on Victers channel last year.

Senior officials of the district administration said that the project was originally envisaged in the offline physical mode of instruction and the sponsoring agencies had expressed doubts over how it would be implemented online. The release of funds can be done only after due certification from the Deputy Director of Education, Ernakulam, who is also the nodal officer for the Roshni project, they said.