West Bengal, Assam, Kerala, Puducherry, Tamil Nadu Election 2021 Live Updates: The Election Commission has announced the poll schedule for four states and one Union Territory, in which West Bengal will vote in eight phases, Assam in three, and Tamil Nadu, Kerala, and Puducherry together on the same day. 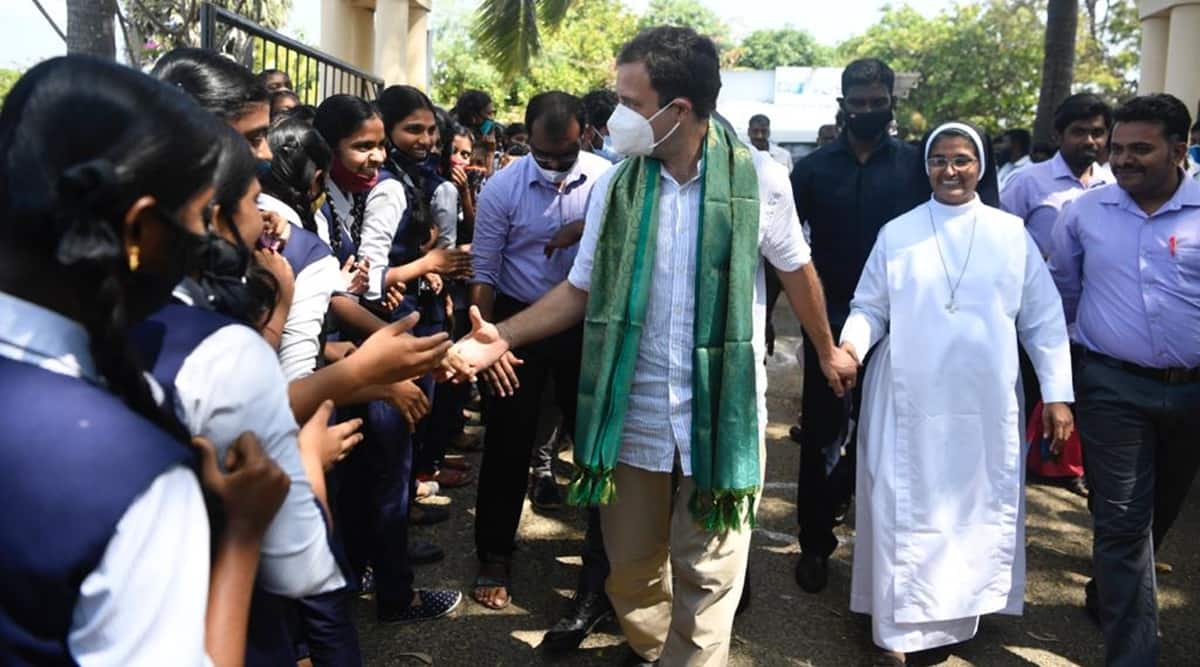 Assembly Elections 2021 Live Updates: Launching an attack at the NDA, Congress leader Rahul Gandhi said that Tamil Nadu should show the way to India in keeping away the forces that are inimical to language and culture and those projecting “one culture, one nation, and one history” concept. Addressing a rally in Kanyakumari, Gandhi also said that history has shown that nobody can rule Tamil Nadu other than the Tamil people. “This election will show the same thing that only a person who truly represents the Tamil people can be a chief minister of Tamil Nadu,”, he said during a public address in Kanyakumari as part of his three-day tour of poll-bound Tamil Nadu.

Meanwhile, Congress leader Priyanka Gandhi Vadra began her two-day visit to poll-bound Assam today by offering prayers at the famed Kamakhya Temple in Guwahati. Clad in a red outfit, the prevalent colour symbolising Shakti, the Congress leader said that she wanted to visit the temple for long and “her wish has come true”.

After visiting the Kamakhya shrine, she left for the airport to go to Lakhimpur in Upper Assam, where she is scheduled to visit Sonari gram panchayat, hold a meeting with party workers and launch a protest programme of unemployed youths. Her visit comes after the return of Hagrama Mohilary, the chief of the Bodoland People’s Front (BPF), to the Congress-fold over the weekend.

Rahul Gandhi accused the BJP-led government at the Centre as well as the Palaniswami government of not respecting Tamil language, culture or tradition. “We have a chief minister here who submits to everything that Modi says. The chief minister represents what Modi wants to do but not the people of Tamil Nadu,” he charged.

The RSS and Modi “insult Tamil language and culture”, he said, adding the people should not to allow them to to gain a foothold.

A plea challenging the Election Commission’s decision to conduct assembly elections over eight phases in West Bengal was filed in the Supreme Court on Monday. The plea, filed by lawyer M L Sharma, seeks the apex court’s direction to the poll panel to stop it from conducting eight-phase elections in the state as it violates Article 14 (right to life) and Article 21 (right to life) of the Constitution. The plea, which may come up for hearing in few days, also seeks a direction to the CBI to register an FIR into the alleged chanting of religious slogans during electioneering in West Bengal.

Clad in a red outfit, the prevalent colour symbolising Shakti, Priyanka Gandhi said that she wanted to visit the temple for long and “her wish has come true”. “I sought blessings for myself, my family and above all for the people of Assam,” she told reporters. Asked about the forthcoming elections in the state, she said she will talk later about politics. “I come to temples to seek blessings and offer thanks to the God who has given me a lot,” she added.

The Election Commission announced Friday the poll schedule for four states and one Union Territory, in which West Bengal will vote in eight phases, Assam in three, and Tamil Nadu, Kerala, and Puducherry together on the same day.

Voting will be spread over a month between March 27 and April 29, and the results for all five Assemblies will be announced on May 2, Chief Election Commissioner (CEC) Sunil Arora told reporters.

These are the last set of elections that Arora will oversee as CEC before his retirement on April 13. By then, Assam, Kerala, Tamil Nadu, and Puducherry would have finished voting, and West Bengal would be halfway through its polling. After this, Election Commissioner Sushil Chandra will take over the reins and oversee the last four phases in West Bengal.