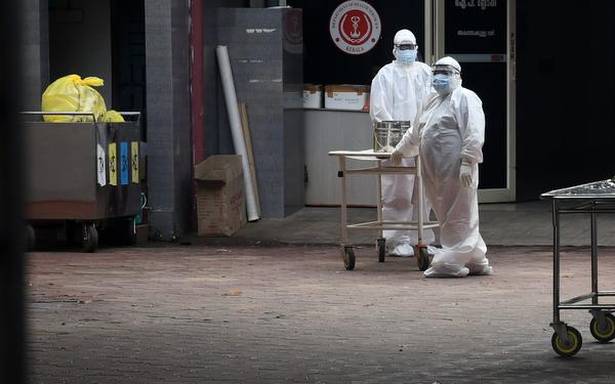 Recently, a woman in her late 40s lost her husband to COVID-19 while she herself was undergoing treatment for the disease in a hospital in Kerala.

Since she had already gone through the trauma of having seen her mother succumb to the virus, relatives could not muster the courage to break the news of another tragedy to her.

In another incident last Saturday, a 41-year-old housewife at Kalamasserry, who had recovered from COVID-19 a few months back, woke up with a jolt and gasping for breath in the early morning hours. "She hugged her two children and husband as if she had a premonition of imminent death while being rushed to the hospital," said her 30-year-old younger brother who still could not come to terms with the loss of his sister.

In another incident at Moothakunnam in Ernakulam district, a 45-year-old man died of post-COVID complications just days after his mother’s death, leaving a young family orphaned.

The surge in COVID-related deaths, which hit a record high of 128 in Kerala on Thursday, has given rise to a complicated mental health issue.

"It is high time we had a special advisory for the bereaved on how to cope with COVID-19 deaths in the absence of the usual mechanism of grief resolution like participatory grieving and ritualistic funerals. With the virus pre-empting even a last hug and a parting kiss for the dear ones, there is no vent for the pent-up emotions. That the victims are relatively young makes the sudden and unexpected demises more difficult to cope with for many," says C.J. John, a noted psychiatrist.

He calls for drawing up an internal mechanism by families, including self-help groups, with the aid of technology for expression of grief whereby the bereaved accept the reality rather than being in denial. "Even health workers and medical professionals are emotionally scarred by the deaths of people under their care," said Dr. John.

Seized of the matter, the Indian Medical Association (IMA) has intensified its mental health support mechanism for medical practitioners and health workers. "There is the hospital-level mechanism, while the IMA is organising webinars with experts on how to stave off stress. Equally stressful is working in PPE kits, recognising which duty hours of those working in such kits are now being almost halved from the previous eight hours," says P. Gopikumar, Kerala Secretary, IMA.

The IMA, in coordination with the Indian Psychiatric Society, has also set up a round-the-clock helpline (0484-7199638) offering succour to those affected by the pandemic, in addition to localised helplines at IMA branches.

"There is a definite fear psychosis as the thought of death crops up the very moment a person is infected, unlike during the first wave when there were far fewer fatalities," said Abraham Varghese, former Kerala president of the IMA.

Meanwhile, there has been a spurt in distress calls received by Maithri, a Kochi-based NGO working towards suicide prevention, with the number of calls almost doubling of late.

"Anxiety has soared amidst deaths all around and calls reflecting the mental, financial, health and academic-related anxieties triggered by the pandemic are on the rise," said Thampi Mathai, director, Maithri.