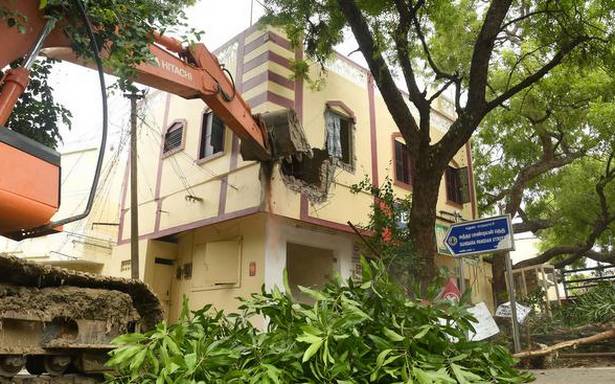 581 houses have been built by encroaching BB Kulam, the tank

The district administration commenced a drive to evict people from Mullai Nagar who have encroached upon the BB Kulam tank on Tuesday.

A revenue official said that for the past 30 years, residents have encroached upon the BB Kulam tank and have built houses and shops inside the waterspread area of the tank. Recently, the Madurai bench of Madras High Court ordered the eviction of the encroachments. The official said that 581 houses have been built by encroaching the waterbody. “We have informed the residents to evacuate from their residences within the next few days,” he said.

The district administration razed 100 shops and two bathroom complexes on Tuesday, which had encroached upon the waterbody.

A large number of residents staged a mass protest on Monday against the eviction drive.

The official said that the High Court had ordered for evicting the residents by April. However, the process got delayed due to the COVID-19 pandemic. “We have urged the residents to relocate to the apartments built at Rajakoor constructed by the Tamil Nadu Slum Clearance Board,” he added.