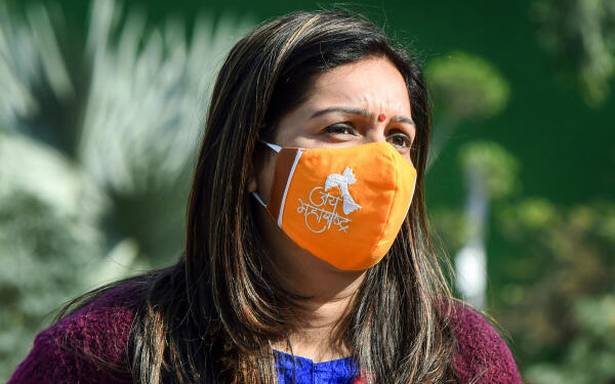 ShivShiv Sena leader Priyanka Chaturvedi expressed her strong disapproval on January 3 to the inclusion of a single woman lawmaker in a parliamentary panel examining a bill to increase the legal age of marriage for women from 18 to 21 years.

“This is disheartening to note that a bill so pertinent to women and the Indian society will be deliberated upon in a committee where the representation is highly skewed,” Ms. Chaturvedi, a member of the Upper House of Parliament from Maharashtra, said in a letter to Rajya Sabha Chairman M. Venkaiah Naidu.

DMK leader and Lok Sabha member Kanimozhi also expressed her displeasure over the inadequate representation of women in the panel.

“There are a total of 110 female MPs but the govt. chooses to assign a bill that affects every young woman in the country to a panel that has 30 men and only 1 woman. Men will continue to decide the rights of women. And women will be made mute spectators,” she wrote on Twitter.

Expressing concern over the inadequate representation of women in the Department Related Parliamentary Standing Committee on Education, Women, Children, Youth and Sports, Ms. Chaturvedi urged Mr. Naidu to ensure more participation of women in the discussion around the Prohibition of Child Marriage (Amendment) Bill.

The parliamentary committee examining the bill has 31 members with Trinamool Congress (TMC) leader Sushmita Dev, a Rajya Sabha MP from West Bengal, being the lone woman.

“Therefore, I request you to ensure that there should be more representation and participation of women in the discussion around the bill that concerns the issues faced by women in India,” Ms. Chaturvedi said in her letter to Mr. Naidu.

“It is of utmost importance that the interests of all stakeholders are taken into account and that voices of all, especially women, are heard and understood by the committee,” she added.

The bill will apply to all the communities and once enacted, will supersede the existing marriage and personal laws.

The introduction of the bill in Parliament was opposed by some members, who had contended that the move infringed upon several personal laws in violation of the fundamental rights and demanded that it be referred to a parliamentary panel for greater scrutiny.