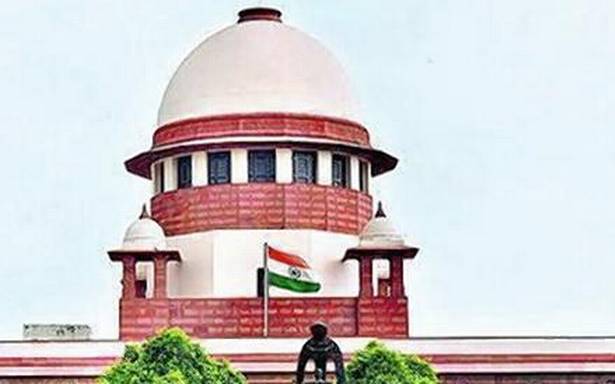 The top court asked States/UTs to remove the discrepancies in figures submitted about the people who have been cured but are still languishing in mental health institutions or who still need treatment.

The Supreme Court on Tuesday directed the Centre to ensure that people lodged in mental health establishments are tested for COVID-19 and are fully vaccinated at the earliest.

A Bench of Justices D. Y. Chandrachud and M. R. Shah took serious note of Maharashtra government’s shifting patients lodged in mental health institutes to homes for beggars and asked it to discontinue the practice immediately saying it is counter-productive and runs against the provisions of Mental Health Act.

The top court also directed all States and Union Territories to extend all cooperation and participate in the meeting of Ministry of Social Justice and Empowerment to be held on July 12.

It asked States/UTs to remove the discrepancies in figures submitted about the people who have been cured but are still languishing in mental health institutions or who still need treatment.

The Bench said that from now on it will monitor the case and would start listing the case after three weeks as it is a very sensitive matter.

The top court was hearing a plea filed by advocate Gaurav Bansal that around 10,000 people who are fit to be discharged are forced to live in various mental hospitals across the country due to social stigma.

During the hearing, Additional Solicitor General Madhavi Divan, appearing for the Centre, said that there were some discrepancies in the data provided by States and they have pointed it out to them.

She said the Ministry is holding a virtual meet on July 12 and they would ensure compliance of an earlier order of the court for submitting a plan for rehabilitation of people who have been cured for mental illness but are still staying in the hospitals or mental asylums.

The Bench said it passed last order on February 10, 2020, in which the Court had asked to be apprised of the progress in preparation of plan by the next date of listing in the form of a status report.

“It’s a very serious matter. Many people who are cured may not be accepted by their families. Tell the concerned authorities to be serious and ensure that court’s order is complied with,” the bench said.

Ms. Divan said that she understands the gravity of the situation as during the pandemic, mental health has taken all together a new dimension.

Mr. Bansal said that he needs to point out two things that these people who are undergoing treatments at mental health establishments should be tested for COVID-19 and completely vaccinated as they are most vulnerable section of the society.

He said that as per the status report submitted by Maharashtra government, they are sending the mentally ill patients lodged in mental health establishments to beggar homes.

“This practice needs to be immediately stopped as it defeats the very objective of mental health act and as per my information, two-three patients have died in the process,” Mr. Bansal said.

Ms. Divan said they have also pointed out to Maharashtra about this and have asked officials concerned to stop this practice.

She assured the Bench that Centre will ensure that these people are tested for COVID-19 and completely vaccinated on priority.

The Bench said that it is time that matter is taken up with alacrity and directed the Chief Secretaries of all States to send their representatives to participate in the meeting of July 12.

It asked Divan to file a status report with regard to the meeting.

“Regarding other aspect of shifting of patients to beggar homes by Maharashtra government, we direct the State government to discontinue the practice immediately as it is against the spirit of the Act”, the Bench said.

The Bench posted the matter for further hearing on July 27.

On July 26, 2019, the top court had asked the Centre to explore the possibility for rehabilitation and reintegration of people who have recovered from mental illness and are fit to go home but are languishing in hospitals due to social stigma.

It had given three months to the Centre to submit a plan about such possibilities and compliance of its 2017 verdict by which the court has asked all the States and Union Territories to rehabilitate those who have recovered from mental illness but are staying in the hospitals.

It had asked the Centre to place before it a survey report with regard to persons, who have recovered from mental illness but are staying in the 43 mental hospitals across the country.

The apex court had on February 25, 2019, directed the Chief Secretaries of all the States and UTs to hold a meeting in four weeks with the Union Health Secretary to chalk out a roadmap for setting up rehabilitation homes for people who have recovered from mental illness and were fit to go home but are languishing in hospitals.

Earlier, the apex court had favoured framing of a uniform national policy to deal with those suffering from mental illness and their release from hospitals after being cured.

It had said that the issue concerned figured in the concurrent list of the Constitution and hence the Centre also has the authority to frame norms.

The PIL filed by Mr. Bansal has raised the issue of release of about 300 people from various mental hospitals in Uttar Pradesh, alleging they were still languishing there despite being cured of their ailments and most of them belonged to poorer sections.