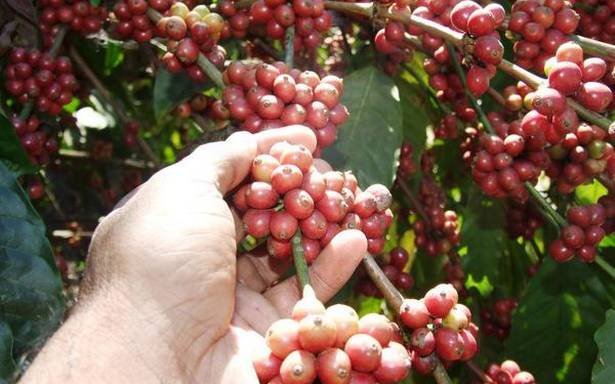 Dearth of workers following pandemic outbreak a matter of concern

The falling price of Robusta coffee, erratic rain in the midst of harvest, and dearth of workers are deepening the worries of coffee farmers in Wayanad, a major coffee growing region in the State.

The spot prices of Robusta coffee and raw cherry on Saturday in the Wayanad market was ₹62 to ₹64 a kg as against ₹71 to ₹72 a kg a month ago. Whereas the price of Robusta coffee beans (cleaned coffee) declined from ₹125 a kg to ₹115 a kg.

The price of a kilogram of coffee beans in the market now is almost equal to the price in 1995, but the daily wage of a worker has gone up from ₹35 to ₹400 a day, says Victor Day, vice president, Wayanad Coffee Growers Association (WCGA).

Coffee production has improved this year, but dearth of workers, especially women, is a matter of concern in the district after the the COVID-19 outbreak, Mr. Victor Day said.

The inflow of labourers from Gundlupet and Coorg of Karnataka during the coffee harvesting season also decreased considerably this year owing to the pandemic, he added. The input cost in the coffee industry is on the rise, whereas the price of coffee is going down, he said.

According to WCGA president Prasanth Rajesh, the erratic rain in the midst of harvesting added to the worries of farmers. Spikes had been formed after the rain, resulting in coffee blooming in different stages. It would not only delay coffee picking this season but also hamper regular picking next year, he said.

“A back-up shower is needed in two weeks to support setting flowers after pollination, but such a situation will worsen the drying process of harvested coffee fruits,” said Jagadeesh, a coffee grower at Panamaram.

Many farmers are facing difficulties in selling their produce that got drenched in the rain. Traders are either rejecting the produce or offering a very low price owing to its inferior quality, he added.

Rampant berry drop owing to the erratic rain in the past fortnight is another concern of growers. “Nearly 15% to 20% of ripened beans on my plantation had fallen due to the rain,” said Manoj Joseph, a farmer at Meenangadi.