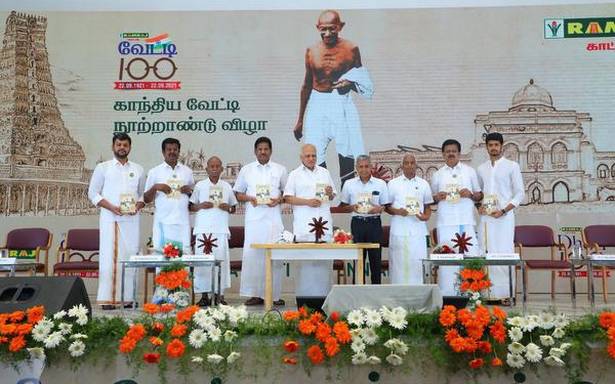 He was speaking at ‘Gandhiya Dhoti Centennial Celebrations,’ an event held in Tiruppur to mark the 100th year of Mahatma Gandhi switching to wearing only dhoti and shunning other form of attire. Mr. Nagarajan recalled Gandhi’s visit to Madurai on September 22, 1921, where he saw people with no access to basic clothing and decided that he too would remain half-attired by wearing only a dhoti and not any upper garment.

Ramraj Cotton has reinvented the dhoti for the younger generation and has supported 40,000 weavers in the past four decades, he said.

The event saw the felicitation of 100 persons who participated in the freedom struggle and 100 weavers and the planting of 100 saplings, according to a press release. Chairman of Bharatiya Vidya Bhavan – Coimbatore Kendra B.K. Krishnaraj Vanavarayar, who was the chief guest of the event, released a book titled Mahatmavai Kondaduvom (Let us celebrate the Mahatma). Chairman of Roots Group of Companies K. Ramasamy received the first copy, the release said.