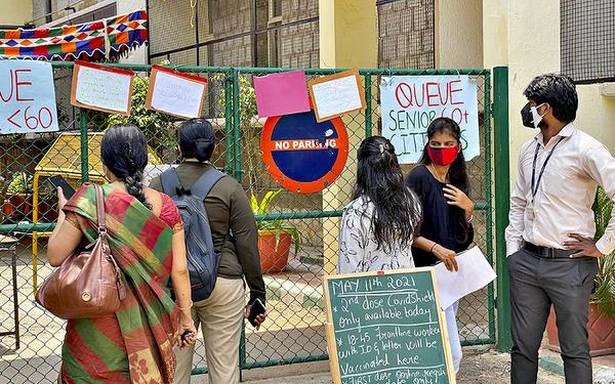 The High Court of Karnataka on Tuesday directed the State government to submit a road map on how it will vaccinate all eligible citizens above 45 years while orally observing that Karnataka appears to have begun COVID-19 vaccination without proper planning.

It said the road map must contain how the government would complete the process of administering both the doses of vaccine to all the categories of health and the frontline workers, and all the citizens above 45 years of age; and also to ensure second dose for amongst these groups who are waiting for their second dose.

A Special Division Bench comprising Chief Justice Abhay Shreeniwas Oka and Justice Aravind Kumar also observed that the vaccination process in Karnataka may turn out to be ineffective if the present scenario continues as many citizens are yet to receive the second dose even after expiry of prescribed period of 4 to 8 weeks from the date of first dose.

The Bench orally observed that the State government appears to have commenced administering of the first dose without any planning on the need to ensure that all those who took the first dose should be able to get second dose within the prescribed period.

From the data, the Bench pointed out that State government immediately need a total 26,08,907 doses of the vaccine – 16,83,448 doses of Covishield and 9,25,459 doses of Covaxin – for administration of second dose of vaccines to the citizens who have already completed 4 to 6 weeks from taking the first dose.

The Bench said the scenario of vaccine availability is disturbing while noticing that total availability of vaccine doses in Karnataka is 9,37,780 which includes 6.5 lakh doses procured recently to exclusively administer to those aged between 18-44 years.

“We hope and trust that both Centre and State government take serious note of availability of vaccines,” the Bench said.