Earlier this week, the remains of Nathan Bedford Forrest and his wife were removed after years of controversy, from a city park at Memphis, in his home state Tennessee. 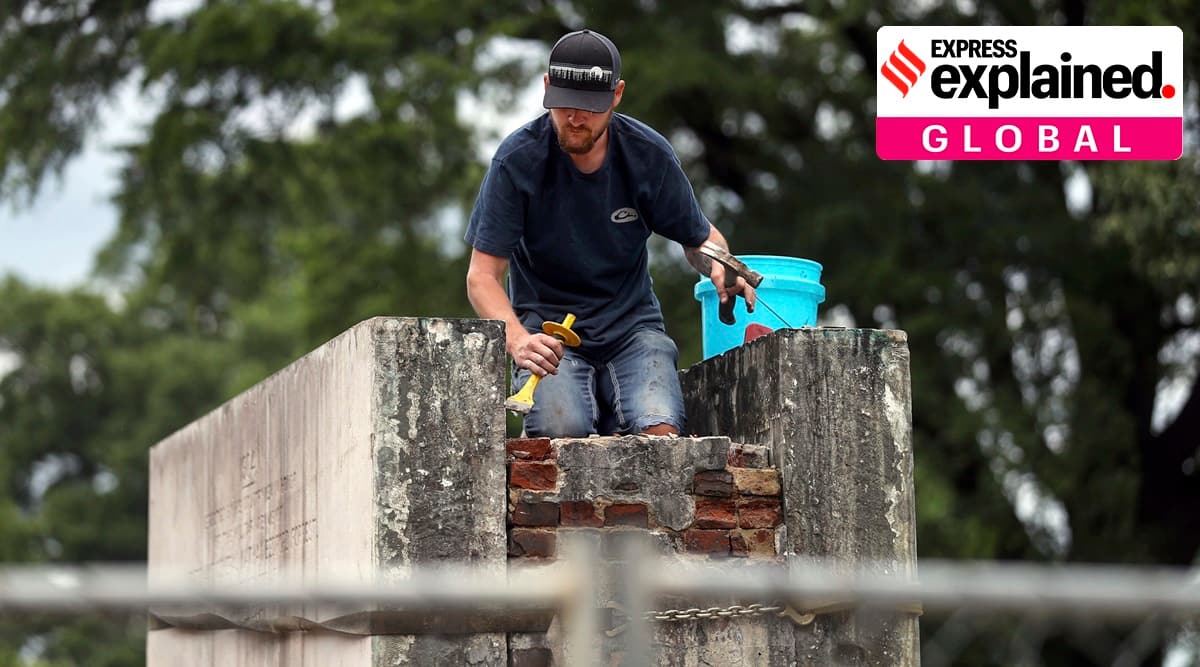 Nathan Bedford Forrest is easily one of the most controversial and popular icons of the American Civil War. The Confederate soldier has memorials erected to him across America, especially in the Southern states. His name has been given to a county, city, park, road, and several high schools. Even Forrest Gump, the fictional character in the novel and movie by the name, claimed that his character was named by his mother after the Civil War General. But Forrest is also hated for being a slave owner and a racist who massacred hundreds of troops consisting of Black soldiers.

Earlier this week, the remains of Forrest and his wife were removed after years of controversy, from a city park at Memphis, in his home state Tennessee. The park that was earlier named after Forrest, had his statue and remains since 1904. In 2015, the statue was removed after the Charleston shooting incident. Efforts to remove his remains from the park has been persisting for a long time now, and had intensified after the white supremacist rally, ‘Unite the Right” was held in Charlottesville in 2017. After being exhumed from the Memphis park, Forrest’s remains will be shifted 200 miles away to the National Confederates Museum in Columbia.

Who was Nathan Bedford Forrest and what is the controversy over his historical legacy?

Forrest was born into poverty in Tennessee in 1821. In his twenties, Forrest moved to Memphis and became a successful businessman and one of the largest slave traders on the Mississippi river. By the late 1850s, Forrest claimed to be worth over a million dollars. The influence generated by his wealth got him elected as Memphis city alderman in 1858. By the time the Civil War started in 1861, Forrest was one of the richest men in the South.

When Tennessee seceded in June 1861, Forrest joined the Confederate army and was soon commissioned to raise his own cavalry. Although he did not have any kind of military education, he proved to be an astute commander and in 1864 led two battles that left the most significant impact on his legacy.

In April 1864, he led his troops to what came to be known as the Fort Pillow attack, where his men killed as many as 300 Union soldiers, most of whom were Black. A Congressional committee deemed the affair an ‘indiscriminate slaughter’ and to African-Americans and many Northerners, Forrest came to be known as ‘Butcher of Fort Pillow’. His most decisive victory, though, came in June that year when he led a force of 3,500 men to the Battle of Brices Roads in Mississippi. But by May 1865, he surrendered his exhausted and defeated troops to Union forces near Selma in Alabama.

In 1867, he joined the then fledgling white supremacist group, Ku Klux Klan as its first Grand Wizard. The group used violence and threat to ensure white control over the newly emancipated slaves. The Klan under Forrest used intimidation to block voting rights of Blacks in the election of 1868. In 1869, Forrest withdrew from the organisation after expressing his disillusionment with the lack of coordination among white supremacist groups in the South.

Forrest died in 1877 and was buried in Elmwood cemetery in Memphis. In 1904, his remains were disinterred from the cemetery and relocated to the Forrest park which was so named in his honour. Historian Court Carney in his research paper, ‘The contested image of Nathan Bedford Forrest’ (2001), wrote at length about how the legacy of Forrest has been debated since the time his obituaries came to be written down. “Embarrassed by their city’s early capitulation during the Civil War, white Memphians desperately needed a hero and therefore crafted a distorted depiction of Forrest’s role in the war,” wrote Carney. He cited one of the obituaries as celebrating Forrest: “The future will recognise him as a grand figure in the history of the republic.” The city’s residents took great pride in the fact that though Forrest was untrained, he knew the rules of battle and described his tactics as being redolent of the ‘methods of the Crusdader’. In contrast, however, Black Memphians and Blacks all over south loathed Forrest for his role as a slave trader and one who massacred the Union troops.

With the emergence of the Lost Cause ideology in the early 20th century that advocated the idea that the Confederates’ cause in the Civil War was heroic and not just based on slavery, the image of Forrest underwent a renewed glorification. It was in this period that a statue of Forrest was erected in the park named in his honour at Memphis and the plan was to turn the park into a site for Confederate memorials. Carney in his paper explained that a few days after the statue was inaugurated “the previously hostile New York Times echoed these sentiments, asserting that Forrest ‘won quite as much appreciation in the North as in the South, though in the former, ofcourse, the appreciation was a little slow in finding expression’.”

For several decades later, the image of Forrest would continue to be celebrated. Things changed, however, with the Civil Rights movement of the 1950s and 60s. In 1968 Martin Luther King was assassinated in Memphis. Following the incident, a period of racial unrest ensued in the city and its demographics changed. While many whites left the city, there was a steady increase in Black residents. With the increased Black influence in Memphis, the traditional celebration of Forrest came to be challenged. By early 1970s, the Confederate flag was removed from Forrest Park and the Tennessee legislature removed Forrest’s birthday from the list of official holidays.

In recent years, memorials to Forrest have frequently come under attack. In August 2012, a monument to Forrest in Selma, Alabama, was vandalised and the bust was removed. In 2013, Forrest Park in Memphis was renamed as Health Sciences Park amidst a whole lot of controversy. Reportedly, the change of names was cause of concern for a few members of the city council who felt that it was downplaying the significance of the Confederacy’s struggle against Union forces. 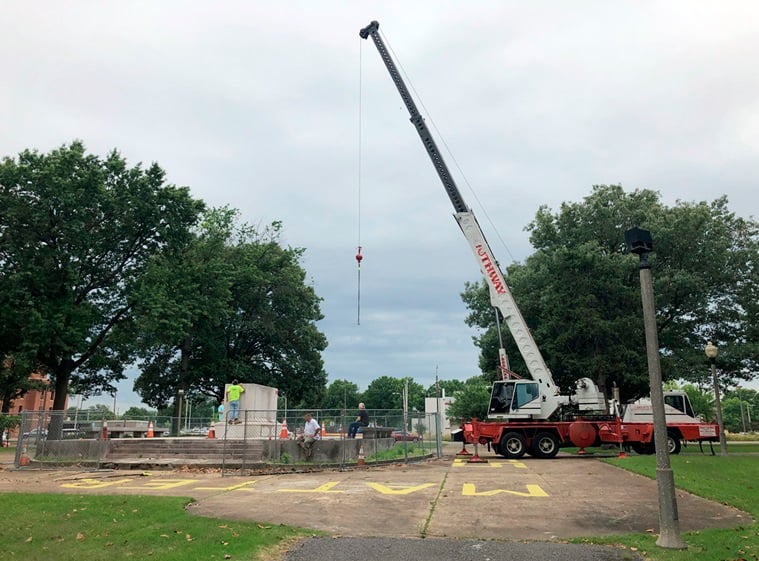 What was the controversy over exhuming Forrest from the park in Memphis?

In 2015, after the shooting incident at Charleston, South Carolina, some Tennessee lawmakers suggested the removal of Forrest’s statue from the Health Sciences Park and its relocation to his original burial site at Elmwood Cemetery. However, permission was denied by the Tennessee Historical Commission under the Tennessee Heritage Protection Act of 2013 which prevents cities and counties from relocating monuments or other objects of historical significance. A few months later the city council sold off the park to a non profit organisation called Greenspace which was not under the purview of the Historical Commission.

The same evening the statue was torn down. The neo-Confederate non-profit organisation, Sons of Confederate Veterans, opposed the move and sued the city council, but lost. Spokesperson Lee Miller in an interview stated, “There’s no reason to tear down history, to move statues. Everyone’s history should be appreciated.”

In 2019, Greenspace transferred the statue to the Sons of Confederate Veterans under a private agreement. It then began planning the removal of Forrest’s remains from the park for which it required approval from his descendants and a court. Once they agreed they decided to relocate the remains to a new location in Columbia.

Currently, residents of Memphis are planning on the celebration of Juneteenth (the annual celebration of the emancipation of slaves on June 19) in the park where Forrest’s remains are being exhumed.