Come 2023, Mumbai will be home to India’s first undersea tunnel, which will be part of the the city’s Coastal Road project. A look at how the tunnel is being constructed and how it compares to other undersea tunnels across the world.

Where are Mumbai’s undersea tunnels being built?

The twin tunnels, which have a length of 2.07 km of which a kilometre will be under the sea, are being built as part of the Mumbai Coastal Road Project, a 10.58-km stretch starting from the Marine Drive promenade to the Worli-end of the Bandra-Worli Sea Link. The road, which will comprise of land-filled roads on areas reclaimed from the sea, bridges and tunnels, is part of a plan to link South Mumbai with North with a toll-free freeway that is expected to ease up traffic in one of the most congested cities in the world. It is the first undersea road tunnel in the country which will pass through Arabian Sea near Girgaon Chowpatty. It will start from Priyadarshani Park and end at Netaji Subhash Road in Marine Drive.

How deep under the sea will these tunnels be built? How are the undersea tunnels being dug?

A 2,800 tonne tunnel boring machine, the biggest of its kind in India, has been deployed to dig these tunnels. An 18 metre shaft has been dug at Priyadarshini Park to lower the machine below the ground from where it will start boring through the strata. The machine, which is operated by a team of 30 people, has a diameter of 12.19 metres which will bore through solid rock.

Tunnel boring machines are used as an alternative to drilling and blasting methods in rock and conventional “hand mining”. TBMs have the advantage of limiting the disturbance to the surrounding ground and producing a smooth tunnel wall. The TBMs consist of the rotating cutting wheel which chips away at the surface. While the TBM’s cutting wheel rotates, a bentonite slurry consisting of specific clay and water mixture is sprayed with force at the mouth of the bored segment. The slurry has a strong ability to absorb water and prevents the part that has been dug from caving in. The TBM will dig one segment of the twin tunnels at a time. What are the major challenges of building the tunnel?

The fact that parts of it are being built under sea makes the construction a significant challenge. The two primary issues of concern are the seepage of sea water into the tunnel and the fear of the tunnel caving in due to the pressure exerted by sea water. The fact that the tunnel is very close to the coast and not in mid-sea has made things easier for engineers who say that all safety measures are being used while constructing these tunnels to ensure that the stability of the structure is maintained. What safety measures are being set in place for commuters in these twin tunnels?

Each of the two undersea tunnels will have two lanes each, 3-3.2 meter wide, with one emergency lane. While the two tunnels are separate, 11 cross sections tunnels are being built to help connect the twin tunnels with each other. These tunnels will be used in case of an emergency where people from one tunnel can be evacuated into the other through the cross section connections.

The drainage system is also designed to cater to seepages. There are slotted drains along the carriageway with fire traps at every 50 metre intervals to collect any seepages, discharge from fire hydrants, and oil spillage from vehicles. The waste water is then conveyed to a shaft tank in the cross passage. The waste water will be treated by an oil separator, and the cleansed water will be discharged to the waste water storage tank by submersible pumps in the shaft tank. How will temperature be regulated inside the tunnel? 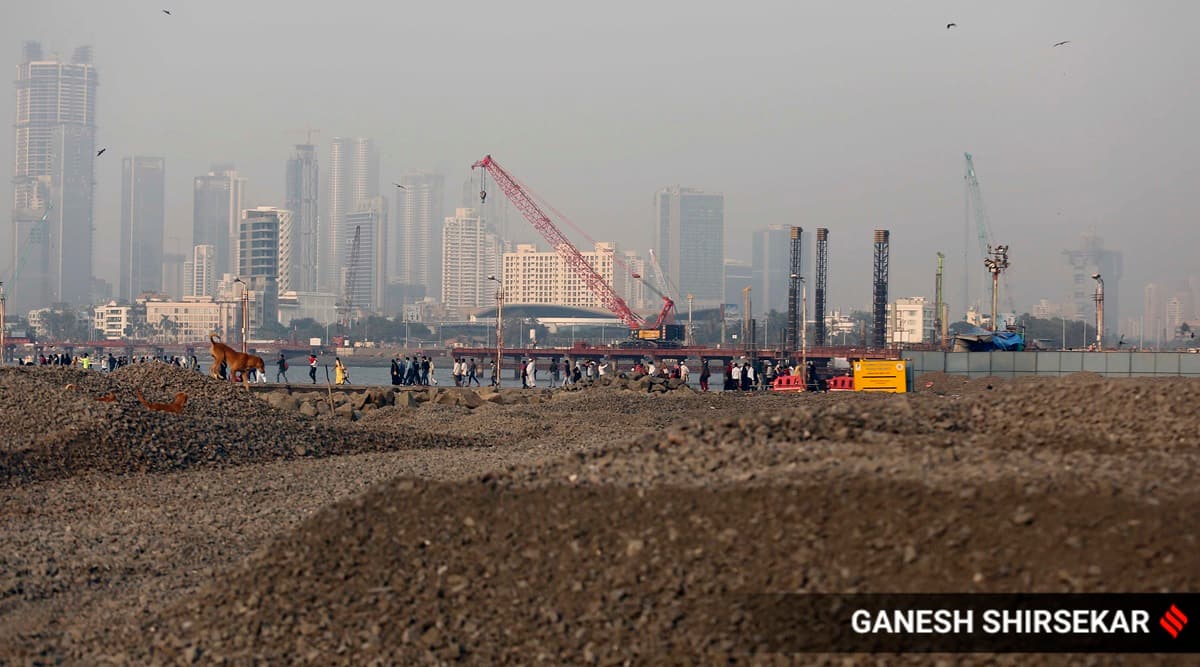 What is the cost of building these undersea tunnels, and when will it be completed?

The total cost of the stretch from Priyadarshini Park to Princess Street Flyover at Marine Drive of coastal road, which mainly includes construction of tunnels and other allied works, is Rs 2,798.44 crore. Each tunnel will take about 8 to 9 months to finish. The BMC said that work for both the tunnels will be completed in about two years. Drilling for south bound traffic tunnel has started and after completion, the TBM will be removed near Marine Drive and then transported back to Priyadarshini Park for drilling second time for north bound traffic.