SARS-CoV-2 variants from the UK, South Africa and Brazil have been particularly worrisome. How fast do they spread, and how do they respond to drugs and vaccines? How much of a concern are they in India? 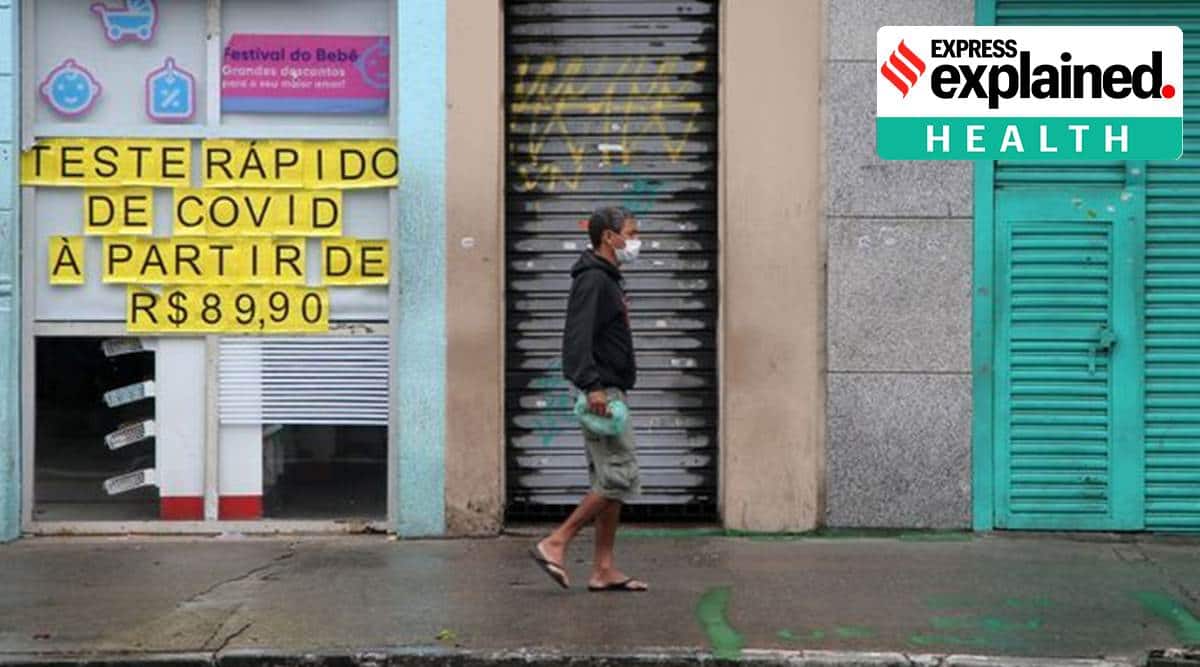 Around the world, cases of infection with new variants of the coronavirus SARS-CoV-2 have been rising. Three of them are of particular concern, and were first detected respectively in the UK, South Africa and Brazil. They are defined as variants of interest (VOIs).

In its weekly epidemiological update on February 25, the World Health Organization (WHO) has given a working definition. A SARS-CoV-2 isolate is a VOI if:

* it is phenotypically changed (it has a different structure and properties) compared to a reference isolate, or has a genome with mutations that lead to amino acid changes associated with phenotypic implications; and

* it has been known to cause community transmission/multiple Covid-19 cases or has been detected in multiple countries.

WHO has specified three types of phenotypic changes associated with a VOI — increase in transmissibility or detrimental change in Covid-19 epidemiology; increase in virulence or change in clinical disease presentation; decrease in the effectiveness of available vaccines and treatment.

What is the variant first detected in UK?

Known as B.1.1.7 or VOC 202012/01, it first emerged in the UK last December. Compared to the reference, all three variants have shown changes in the spike protein, the part of the coronavirus that attaches to the human cell.

In the B.1.1.7 variant are multiple mutations in the spike protein. One mutation, called N501Y, makes the variant more effective at binding to the ACE2 receptor (the human protein that serves as the entry point for the coronavirus). Other significant spike protein mutations are D614G, A570D, P681H, H69/V70 deletion, and Y144 deletion. Public Health England has said these mutations have led to the virus becoming about 50% more infectious and spreading more easily.

How many countries have reported community transmission of this variant?

In India, according to the Health Ministry, only 280 cases of infection with the UK strain have been detected during genomic surveillance.

What is the variant from South Africa?

First detected in South Africa last October, it is called 501Y.V2 or B1.351 (and VOC202012/02 in the UK). This one is defined by nine changes in the spike protein in comparison to the reference — the “Wuhan-1 D614G spike mutant” that previously dominated in South Africa.

This variant, too, is considered highly transmissible. Concerns associated with it are that the spike mutations could lead to antigenic changes that are detrimental to monoclonal antibody therapies and vaccine protection.

A paper by Columbia University researchers, accepted for publication in Nature, has examined the loss of plasma’s neutralising activity against this variant. It also analysed sera from 12 participants of the phase 1 clinical trial of Moderna’s vaccine, and from 10 individuals who received the Pfizer vaccine.

It found the major contributor to the neutralisation resistance appears to be E484K (one of the mutations). “Taken together, the overall findings are worrisome, particularly in light of recent reports that both Novavax and Johnson & Johnson vaccines showed a substantial drop in efficacy in South Africa,” the researchers concluded.

Also, in a study from the University of Witwatersrand, preliminary findings showed efficacy of the Oxford-AstraZeneca vaccine against mild and moderate Covid-19 disease was 21.9% in participants in South Africa. However, protection against moderate-severe disease, hospitalization, or death could not be assessed in this study.

The WHO has stressed it “is vitally important now to determine the vaccine’s effectiveness when it comes to preventing more severe illness caused by the B.1.351 variant”.

How far has this one spread?

In India, according to the Health Ministry, only 11 cases of this variant have been detected during surveillance.

And what is the variant from Brazil?

This is called P.1, a branch of the B.1.1.28 lineage. It was first reported by the National Institute of Infectious Diseases in Japan in four travellers from Brazil, during routine screening at Tokyo airport.

Public Health England has designated this too as a variant of concern as it shares some mutations with the South Africa variant, such as E484K and N501Y. “It is possible that this variant may respond less well to current vaccines, but more work is needed to understand this,” the PHE has said.

The US Centers for Disease Control says there is evidence to suggest that some of the mutations in this variant may affect its transmissibility or the ability of antibodies generated through previous infection or through vaccination to neutralise the virus.

How many countries have reported it?

In India, according to the Health Ministry, only one case of this variant has been detected.

How much of a concern are these in India?

The Health Ministry has said that the there is no scientific evidence to suggest that the recent surge is numbers is linked to these three variants.

“… There is no reason for us to believe, on the basis of scientific evidence, that these [variants] are responsible for the upsurge of the outbreak you see in some districts of Maharashtra and Kerala. We are constantly watching the behaviour of mutations,” Dr V K Paul, the head of India’s Covid-19 task force, has said.

“Reporting only the detection does not lead to any attribution for any phenomenon on the ground. Because to relate an occurrence of a virus to change and disease pattern, other epidemiological and clinical information has to be linked to these mutations,” Paul said.