Scottish First Minister Nicola Sturgeon, who leads the pro-independence Scottish National Party (SNP,) has described this election as the most important in her country’s history. On Thursday, Scotland took to the polls to vote for its next parliament with a third of the results expected to be announced on Friday and the rest on Saturday. Scottish First Minister Nicola Sturgeon, who leads the pro-independence Scottish National Party (SNP,) has described this election as the most important in her country’s history. The Scottish election campaigns have been widely dominated by discussions around another independence referendum, an issue that has regained prominence since the UK voted to leave the European Union in 2016.

Sturgeon remains Scotland’s most popular politician and the SNP is polling ahead of its rivals according to most mainstream polls. Sturgeon has been praised for her handling of the Covid-19 pandemic and is widely expected to win the elections. However, it is yet to be seen whether she will secure a majority in parliament or if Scotland will be subjected to another five years under a minority coalition rule. Sturgeon’s quest for a majority has been slightly hampered by her rift with former mentor Alex Salmond, who was forced to leave the SNP following allegations of sexual misconduct. Salmond’s new Alba Party is unlikely to be a major player in this election but will succeed in taking a share of the pro-independence vote away from the SNP.

The only time the SNP won a majority before, in 2011, Britain’s then Prime Minister, David Cameron gave in to pressure and agreed to a referendum on Scottish Independence. Subsequently, in 2014, Scots voted by 55-45% to remain in the Union that it had voluntarily joined back in 1707. Sturgeon has vowed to demand the legal right to a referendum by the end of 2023 if her party wins a majority in Edenborough’s 129 seat parliament. However, even if the SNP fails to win a majority, Sturgeon could still call for another referendum if there is a majority of pro-independence parties in the Scottish parliament.

UK Prime Minister Boris Johnson has vehemently rejected the idea of Scottish independence, arguing that the 2014 referendum was meant to be a once in a generation occurrence and thus should not be repeated for another 40 years.

Arguments for and against independence

Support for Scottish independence has registered near or above 50% of support over the last year, largely due to widespread opposition to Brexit and Johnson’s government in London. In the 2016 Brexit referendum, 62% of Scottish voters opposed leaving the European Union only to be overruled by the rest of the United Kingdom. Scottish politicians and voters have been outspoken in their support for European unity and have looked for ways to maintain Scotland’s ties with Brussels, independent of any deal negotiated by Westminster. Despite Scottish calls for closer engagement with the EU, Johnson’s government opted instead for a bare-bones trade deal with the bloc, causing widespread discontent amongst Scots.

Scottish voters also feel underrepresented in their own governance. Nearly 90% of the UK’s population is English and despite parliamentary seats being created to overrepresent Scotland, England still has 532 out of 650 seats. The majority of Scots have voted against the Conservative party in every election for decades and yet they couldn’t prevent the party from taking power in 8 of the last 11 contests since 1979. Scottish foreign policy is also controlled by London, and Scotland is prohibited from maintaining official diplomatic relations with other countries without going through the UK foreign policy establishment.

Several Scottish industries have been badly affected by Brexit and voters believe that independence would give them the opportunity to mitigate that damage and take control of their economy. Independence would give Scottish fisheries a chance to re-establish trade relations with the EU, thus ending years of bureaucratic red tape caused by Brexit. It would also give Scotland full autonomy over its oil and gas revenues which are currently shared with London. Scotland is currently the source of 96% of the UK’s oil and 63% of its natural gas production. Politicians including Sturgeon have long opposed the UK’s nuclear program being stationed in Scotland, arguing that it exposes the region to unnecessary threats. Independence would allow them to act in accordance with their own priorities on those matters and several others as well. 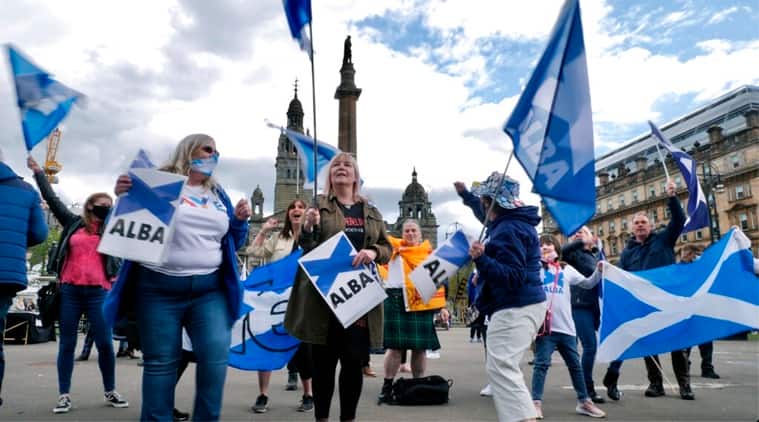 On the other hand, there are strong arguments being made against Scottish independence. Putting aside the need to hold a second costly referendum so soon after the first one, a large share of Scottish voters see advantages in remaining a part of the UK.

For one, Britain has a population of 64 million compared to Scotland’s population of 5 million. Being a part of a relatively large global power confers upon Scotland significant bargaining power in trade agreements and security pacts. It also provides it with greater resilience against economic shocks. Additionally, England is by far Scotland’s largest trading power and destroying the common market and establishing border controls would have severe ramifications on the Scottish economy. Scotland is also currently fiscally dependent on the UK, paying less to union coffers than it receives in return. If Scotland were to leave the UK, it would likely have to raise taxes in order to maintain current public spending.

Johnson has also boosted his popularity in Scotland due to his effective rollout of the Covid-19 vaccine and his job retention scheme that has provided wages to furloughed workers during the pandemic. Domestically, the SNP has many critics over a range of issues including its inability to boost educational outcomes and prevent drug deaths in its 14 years in power. Dissatisfaction with SNP governance and support for the government in London could incentivise Scottish voters to retain their faith in the Union. Additionally, if independence is about Scottish control over its own affairs, some have questioned the logic of separating from Westminster only to then relinquish decision making control to the EU by rejoining the bloc.

How Scotland could push for another referendum

Despite some calls to hold an independence vote under any circumstances, Sturgeon has maintained that the referendum would have to be EU endorsed and legally binding like the one conducted in 2014. A referendum held without the consent of the British would struggle to gain international recognition similar to the 2017 Catalonian movement that was rejected by Madrid and most global powers. More than half the people across the UK believe that Scotland should be allowed a second referendum according to a poll conducted by Ipsos Mori. However, the ruling Conservative government under Johnson has rejected the notion of granting a ‘Section 30’ order which the Edenborough parliament would need to stage another legally valid referendum. Scottish nationalists would likely have to offer support to the Labour party in the next general election, in exchange for Labour’s potential backing of their right to a second referendum.

Under the Scotland Act of 1998, the Union between England and Scotland, is a matter reserved for the British parliament. Without the green light from London, Scotland will have limited options to hold a legally binding, internationally recognised referendum. Sturgeon has indicated a willingness to hold a referendum without parliamentary support and then allow the British government to challenge the matter in court. However, there is no legal precedent for such a move, and lawyers and academics disagree over how that situation could play out. Scottish voters could potentially stage angry protests to demand British compliance, but such an outcome would be less than preferable for any of the involved parties.

Independence from the UK would have widespread ramifications for both England and Scotland, as well as on the stability of the union as a whole. An analysis from the London School of Economics predicted that independence from the UK would cost Scotland up to three times as much in lost revenue as Brexit will. Additionally, negotiating a trade deal with the EU or re-entering the bloc altogether will be a costly and time-consuming process. Scotland would also have to bolster its defence capabilities, extract itself from British public funding schemes and establish independent trade and security arrangements with other countries. England and Scotland would both have to consider the matter of creating a physical international border and account for the considerable number of people and goods that currently cross between the two nations. Like Cameron with Brexit, Johnson would presumably also have to resign in the event of the independence vote going against him. The success or failure of the hypothetically independent Scottish state would have ramifications on the Northern Irish and Welsh independence movements respectively, potentially proving to be the final nail in the coffin of the British Empire.

(The writer is an intern with indianexpress.com)