IPL 2020 final: While these compelling stats illustrate the depth in in MI's batting, it also underscores how crucial Pollard and Hardik have been in Mumbai’s dominant run to their record fifth IPL title in Dubai. 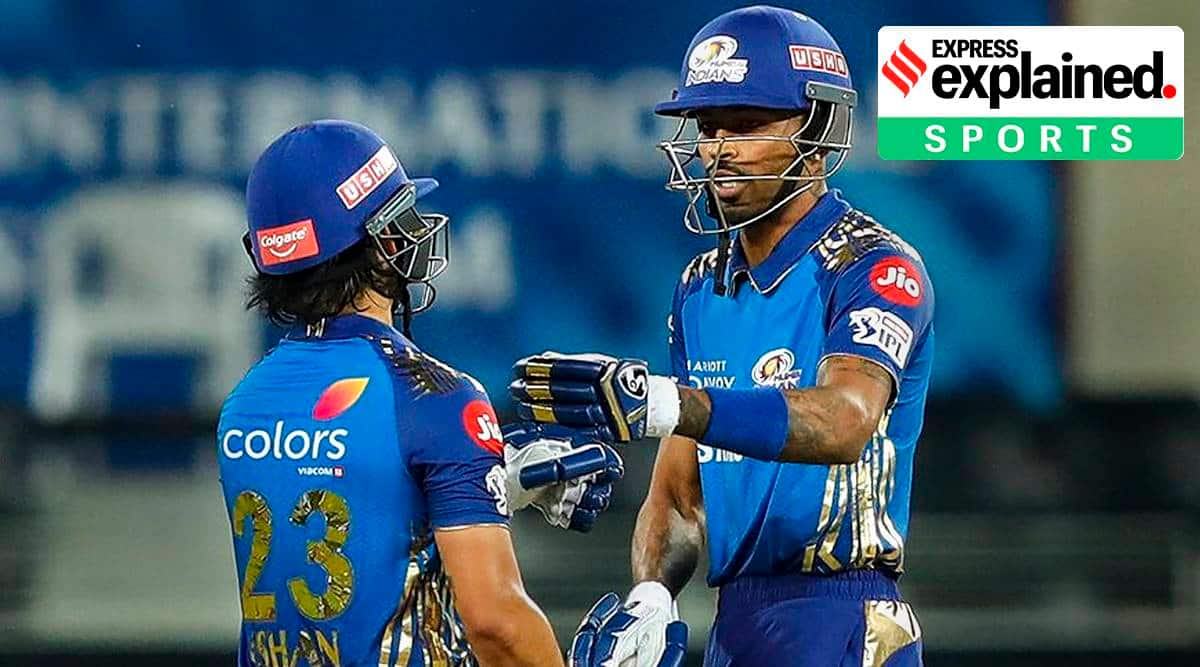 Four of the top 10 batsmen to feature in the list of the most number of sixes hit in IPL 2020 play for Mumbai Indians.

Ishan Kishan tops the list with a staggering 30 sixes from 14 games. The 22-year-old is closely followed by Hardik Pandya whose ledger reads 25 from 13 games. Kieron Pollard and Quinton de Kock occupy the 8th and 10th spots respectively, with 22 maximums apiece.

While these compelling stats illustrate the depth in in MI’s batting, it also underscores how crucial Pollard and Hardik have been in Mumbai’s dominant run to their record fifth IPL title in Dubai on Tuesday (November 10).

How have Pollard and Hardik been vital to Mumbai Indians’ fortunes this season?

Pollard and Hardik bat down the order, at No. 5 and No. 6 respectively, and are essentially the team’s power-hitters. Their presence gives the top order the license to unburden themselves and launch a blistering attack in the Powerplay, and sustain that momentum in the middle overs as well.

Kishan, de Kock and Suryakumar Yadav have scored at such a scorching pace – they had strike rates in excess of 140 – and smoked sixes at will because they know they have counter-attackers down the order if a wicket or two falls quickly.

Take the example of Qualifier 1 featuring Mumbai and Delhi Capitals. Batting first, Mumbai had seemingly lost their way after a prolific start, meandering to 108/4 after 13 overs.

With the top three batsmen and Pollard back in the dug-out, it looked like the batting would collapse like a pack of cards. Instead, Kishan and Hardik (37 off 14 balls; batting at No. 7) took 60 runs in the last 3.5 overs to take the team to 200/5, which seemed well beyond them at one stage.

Such an aggressive and counter-attacking approach meant that their captain Rohit Sharma’s indifferent form and fitness in the tournament (he came good with a flawless 51-ball 68 in the final) didn’t hurt them.

What sort of scores did they get in this tournament?

They have been in pretty good nick. But due to the very high levels of consistency displayed by the top order, they did not get too many chances.

Pollard came out to bat in only 12 of the 16 games, and remained unbeaten in five of those innings. Overall, he scored 268 runs, with a strike-rate of over 191. His highest score was an unbeaten 24-ball 60 against Royal Challengers Bangalore that dragged the match to Super Over.

Hardik scored 281 runs from 14 games at a strike-rate of 178. His highest score was a 21-ball 60 against Rajasthan Royals, a match in which he and Saurabh Tiwary ransacked 79 runs off the final five overs, and galvanized the team to a match-winning score of 195/5.

How are Pollard and Hardik different from Andre Russell and Sunil Narine?

Kolkata Knight Riders have Andre Russell and Sunil Narine, who are expected to play a similar role. But Pollard and Hardik are not just technically more proficient, unlike the KKR marauders, they also have the ability to shift gears seamlessly.

Russell has shown his shortcomings against quality leg spin, while Narine’s travails against the short ball is pretty well documented.

Pollard and Hardik, on the other hand, have no such apparent weakness. Against spinners, they target the straight boundaries, and both of them are equally adept at playing the horizontal shots.

A yorker marginally short off length can disappear into the stands. In fact, the margin of error while bowling to both these batsmen is minimal. 📣 Express Explained is now on Telegram

Do other franchises have power-hitters of Pollard and Hardik’s calibre?

Not quite. KKR’s Russell and Narine fell short of expectations this season. The other franchises preferred to play the waiting game due to the paucity of big hitters.

For the bulk of the season, Delhi Capitals struggled to find the best playing XI. The team management had utilised Marcus Stoinis and Shimron Hetmeyer, but they lacked the consistency.

Things came to a boil during their tense chase against the Royal Challengers in the Eliminator. In pursuit of 132, they were precariously placed at 67/4 in the 12th over, when Holder joined Kane Williamson. With an asking rate of well over 9 runs per over, and an inexperienced Abdul Samad and the bowlers to follow, Williamson and Holder did not have the luxury to go for an assault from the outset.

Ultimately, they crafted the chase with skill and gumption, and by eliminating any semblance of risk. It’s not hard to predict how Mumbai Indians would have approached that chase.