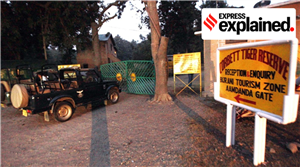 India’s best known hunter, Corbett earned fame after he tracked down and killed a number of man-eating tigers and leopards With Union Minister of State for Environment, Forest and Climate Change Ashwini Kumar Choubey proposing to change the name of Corbett National Park to Ramganga National Park, a look at the origins of the park and the legacy of the man who lent it its name.

Jim Corbett’s name has lent itself to India’s oldest and most celebrated national parks and to the cottage industry that has grown around it. From guesthouses to hair saloons, from general stores to gift shops, Corbett’s name lives on in and around the forests of Uttarakhand where the celebrated hunter-naturalist once lived and whose efforts led to the establishment of the national park.

But the Park was not always called Corbett. Set up in 1936 as India’s — and Asia’s — first national park, it was called Hailey National Park after Sir Macolm Hailey, the governor of the United Province. It was renamed Ramganga National Park, named after the river that flows through it, shortly after Independence and was rechristened yet again as Corbett National Park in 1956.

“This was one of the few instances when something was named after an Englishman after Independence. Usually, things named after the English were renamed after Independence but this was the other way around,” says Stephen Alter, author of In the Jungles of the Night: A Novel About Jim Corbett (2016, Aleph Book Company). “It was at the insistence of Corbett’s friend, the great freedom fighter from Kumaon and the first chief minister of Uttar Pradesh, Govind Ballabh Pant, that the park was renamed after him, to honour his conservation efforts,” says Alter, whose book draws on many Corbett stories to paint a sparkling portrait of the man.

With its hills, grasslands and streams, it is ideal tiger territory. The place from where Project Tiger was launched in 1973, with its tiger population at 163, it boasts of a single largest tiger population in a tiger reserve and one of the highest tiger densities in the country. Home to a number of species, including 600 elephants and over 600 species of birds, the majestic forest is a big draw with tourists.

Jim Corbett, the hunter, the naturalist

Born in Nainital in 1875, Edward James Corbett lived in India till Independence, after which he left for Kenya where he died in 1955. India’s best known hunter, Corbett earned fame after he tracked down and killed a number of man-eating tigers and leopards (he is said to have killed over a dozen). But he was known equally well as a storyteller whose shikar yarns and forest tales kept his audience under a spell, and, later, as a conservationist.

An ace shot, Corbett was called upon regularly by the government to track and shoot man-eaters in the villages of Garhwal and Kumaon in Uttarakhand. Son of a postmaster and one of many siblings, Corbett along with his family would come down from the hills every winter to their winter home in Kaladhungi in the foothills, which houses a museum now.

The foothills would be his training grounds, where he would learn — or as he would say “absorb” — the ways of the forest, jungle lore and much more. “I have used the word ‘absorbed’, in preference to ‘learnt’, for jungle lore is not a science that can be learnt from textbooks,” he wrote. He would absorb the forest like the back of his hand, a skill that would hold him in good stead in his hunting expeditions, captured so vividly in the Man-eaters of Kumaon (1944), The Man-Eating Leopard of Rudraprayag (1948), The Temple Tiger and More Man-eaters of Kumaon (1955), and other gripping accounts. His books are as much an account of nature as they are of people. My India (1952) is an intimate account of the people he met both in the hills and in the plains — in Mokameh Ghat in Bihar, where his work in the Railways took him while Jungle Lore (1953) meanders through forests in sun and shadow to capture the calls of animals and birds and even an occasional banshee. From the racket-tailed drongo who “can imitate to perfection the calls of most birds and of one animal, the cheetal” to himself understanding and imitating the calls of birds and animals, Jungle Lore shows you just how much of a riveting storyteller Corbett is, letting you absorb the forest rather than learn it.

Corbett, who volunteered in both the World Wars and was given the honorary rank of colonel, spent much of his life with his sister Maggie. In his later years, he all but gave up hunting, turning instead to wildlife photography and conservation. Corbett was one of the first persons to take cine-films of tigers in the wild, writes Alter.

“When the park was made (in 1936, hunting was prohibited in 1934), there was no dearth of forest nor of prey base, so the contribution of Jim Corbett was that he saw much before anyone else that because of the spread of roads, motor car and loosening of control of arms, the tiger did not stand much of a chance,” says Rajiv Bhartari, who was director of Corbett Tiger Reserve from 2005 to 2008 and is now principal chief conservator of forests (head of forest force), Uttarakhand. “So, he used all his skills, contacts and resources to work towards the establishment of Asian mainland’s first national park. It was Corbett’s vision that the tiger needed protection. The national park today presents over eight decades of conservation.”

Corbett’s legacy, perhaps, lies in his early understanding of the link between conservation and community. “This path between protection and local welfare is a very tough path and Jim Corbett had a coherent philosophy. Not only did he try to work towards protection of tigers but he was equally sensitive and compassionate towards the villagers,” says Bhartari who has supervised research both on Corbett’s legacy and the history of Corbett National Park at the Wildlife Institute of India. “He was instrumental in setting up Chhoti Haldwani as a model Kumaoni village. In Corbett, there has been a connection between conservation and local people. When Corbett National Park was formed, the initial boundary was very carefully determined that no rights of villagers were affected. From its inception, it has enjoyed the goodwill of people, because of Jim Corbett. I think that’s his legacy, the unique relationship between people and conservation. Today we talk of development, of agriculture, but Corbett spent much of his latter life in trying to improve agriculture in Chhoti Haldwani by spreading seeds, strengthening irrigation and encouraging villagers to grow not just for consumption but for sale. In his house itself, he let a worker run a tea shop to give him a source of living and finally when he went to Kenya, he gifted all his land to the villagers he had settled in Chhoti Haldwani,” says Bhartari.

The proposed renaming, says Alter, is insignificant, “so long as Corbett’s legacy of conservation continues.” “You can call Connaught Place Rajiv Chowk, but it doesn’t change people’s memories of the place. What’s important is not the name but that conservation efforts in the Park are strengthened,” says Alter.