Ziona Chana, famous as the patriarch of the 'world's largest family', died in Mizoram earlier this month. Who was he, how did his sect come into being, how do its members live and who takes over after his death? 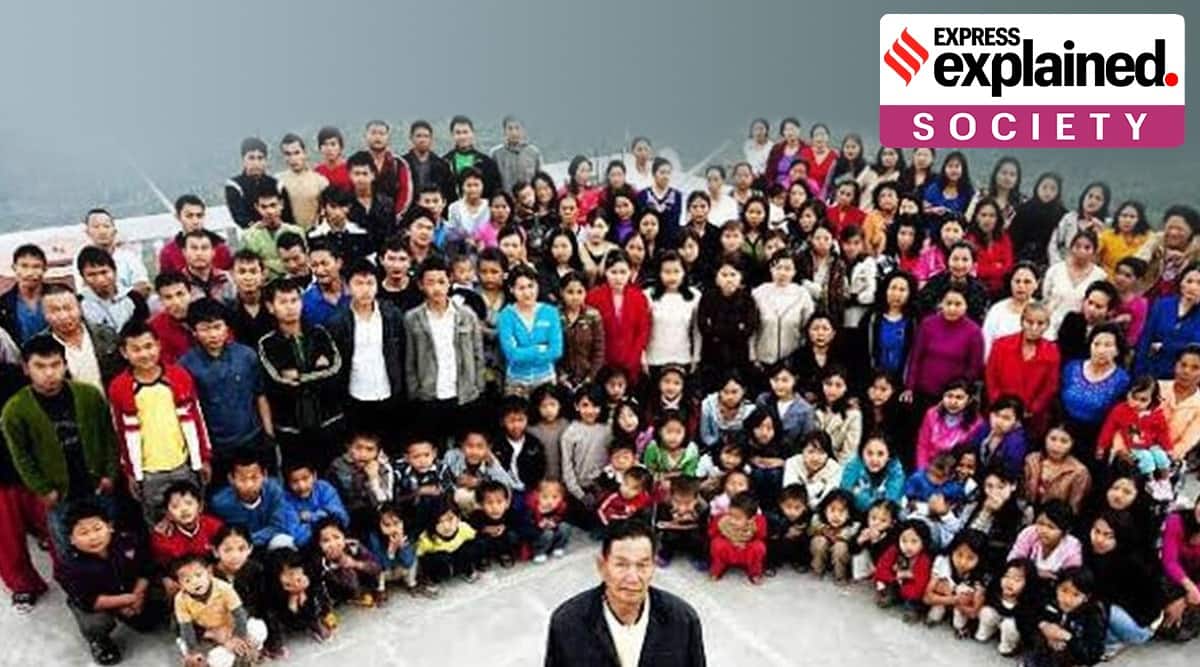 When Ziona Chana, famous as the patriarch of the ‘world’s largest family’, died in Mizoram earlier this month, a flurry of headlines followed. For years, Ziona’s incredible story — featuring his 38 wives, 89 children and 36 grandchildren — has fascinated the world, drawing tourists and journalists to his four-storeyed purple home in a Mizoram village. However, beyond his polygamous nature, little is known of Ziona, or the religious sect he led. Who was Ziona Chana, how did his sect come into being, how do its members live and who takes over after his death?

“Chhuanthar Kohhran” (Church of New Generation), as Ziona’s cult is called, first made headlines when HC Vanlalruata, a local Mizo journalist, stumbled upon his story sometime in 2010.

In the years that followed, the 100-roomed “Chuuar Than Run” (New Generation House) where Ziona and his family lived, became a tourist spot, and is even listed as a ‘place of interest’ in the state’s official tourism website.

Many journalists, most from international media, visited too. “UK, South Korea, Japan, Australia, Germany, France — they came from all over… curious about the family and to click photos and videos,” said 62-year-old HC Lalriantghana, a nephew of Ziona, who joined the sect in 2007. While Ziona’s immediate family of around 200 members stay in the main house, the sect followers live around it, within a rough 4-km radius.

Visitors are allowed only on the ground floor and only some got to meet Ziona, who was shy and spoke only in Mizo — an impediment for many international journalists. Yet, it was not long before Ziona became a sensation of sorts — his story reportedly featured in American franchise Ripley’s Believe It or Not twice.

According to Mizo historian Vanlalpeka, the sect is rooted in a movement that broke away from the Presbyterian church in the 1930s.

“The founder of the sect was a man named Khuahtuaha, who was excommunicated from the church for having an illegitimate child,” said Vanlalpeka, who teaches the ‘History of Christianity’ at the Academy of Integrated Christian Studies in Aizawl.

Vanlalpeka started studying the sect in 2018, interviewing its senior members, as well as, on one occasion, Ziona himself. In 2019, his paper on the family, “Escaping Prophets in Zomia: The Sect of Ziona”, was published in Horizon Research Publishing (HRPUB).

During his research, Vanlalpeka found that Khuahtuaha was known to have a “magnetic personality” which led many to settle with him. Gradually a colony of his followers established themselves in the outskirts of the village of Baktawng, 70 km from Aizawl. In 1955, Challianchana or Chana, Khuahtuaha’s younger brother took over, before it was handed over to his nephew Zionnghaka or Ziona in 1997.

Under Ziona, the community grew to have approximately 3,000 followers, who all live and work in Baktawng. “For them, Ziona occupies ‘god-like’ status,” said Vanlalpeka. The sect leads a communal life, with their own belief system, marked by polygamy, isolation from mainstream society and economic sustenance.

While it is primarily a religious sect that practises polygamy, Vanlalpeka said it was difficult to neatly club it under Christianity. “It definitely borrows from Christianity. For example, obedience, honestly, morality and other virtues that are rooted in the Bible are taught to its followers, but neither do they use the Bible, nor do they sing hymns, or celebrate Christian festivals,” said Vanlalpeka.

There have been other religious sects in Mizoram too, such as the Vanawia Pawl (Vanawia’s Sect) and Lalzawna Pawl (Lalzawna’s Sect) in the 1970s. “But neither could sustain itself beyond a decade, and gradually fizzled out. What is interesting about Ziona’s sect is that it not only continues to sustain itself but even grows stronger,” said Vanlalpeka.

While both his predecessors practised polygamy, it was most pronounced under Ziona, who had 39 wives, the youngest being around 40, and the oldest above 70.

It was this unique feature that made Zionnghaka or Ziona the most significant.

The sect considered the polygamy as “divinely ordained” said Vanlalpeka. “Some members said that polygamy they practised was ‘normal’, and not driven by sexual desire, but by love. However, this claim cannot be proved,” said Vanlalpeka.

According to Vanlalpeka’s paper, while the community under Khuangtuaha was perceived to be “sexually perverted” by the church, it is believed that many “immoral behaviours” were discarded under Chana’s time, and even further, during Ziona.

Vanlalruata, the journalist who first broke the story about the sect, said that despite visiting several times he found that there was always an element of secrecy in the household. “Visitors were allowed to chat with some members but they were all very private,” he said.

While it is the family’s unique size that makes news, the sect’s economic self-sufficiency, an achievement believed to be rooted in its work ethic, is little-known.

“Take away the polygamy and the family size, they actually lived a normal, industrious and hardworking life,” said Vanlalruata. The members are skilled carpenters and utensil makers. Products are sold outside the village, and that is what helps sustain them.

A visit to the village will reveal men, women, and children, often busy in activities through the day, making utensils, door panels, tables, beds, cupboards etc. “We are usually working from dawn till evening,” said Lalriantghana, adding: “Even Ziona would work as hard… leave early in the morning to practise Jhum cultivation.”

According to Vanlalpeka, this economic sufficiency seems to be grounded in the traditional socio-economic set up of Mizo society.

When it was founded, the sect members, many of whom were uneducated, were looked down upon by surrounding villages.

During Ziona, a school was set up (it now has classes till the higher secondary level) for sect members. “Education and economic self-sufficiency is what helped them outlive other similar cults,” said Vanlalpeka.

Ziona was known to be the most liberal of the three sect leaders. “Members were allowed to travel and even study outside, and come back, too,” said Vanlalpeka.

Life in the sect is centred around its church. Children attend school, with adults usually busy in various workshops. The members celebrate festivals too — although not Christian festivals such as Palm Sunday, Good Friday and Easter, but birthdays and death anniversaries of their founding fathers.

“Even if they seceded from the church, their administrational set up is an imitation of the church. For example, they have a ‘chhuanthar military’, much like The Salvation Army, with its own uniform and military-like hierarchy,” said Vanlalpeka.

The sect also has recreational activities. Vanlalpeka said that the sect members were ardent followers of football. “They loved the sport — and one of their festivals had all its members —young and old, men and women — compete in a football match in their playground,” he said.

The sect after Ziona

On June 13, Ziona passed away after five days of illness. “He was diabetic and was sick for a few days before we moved him to the hospital. He died within hours,” said Lalriantghana, adding that Ziona had a great personality. Vanlalruata said Ziona was tall, handsome and well-built.

While it has been nearly two weeks since his death, Ziona’s successor is yet to be decided. “We are still very sad because for us, he was like a god,” said Lalriantghana.

Since it was a religious cult, the state never interfered with its workings. “In fact, local legislators have always maintained a good relationship with Ziona because his family accounted for a considerable number of votes in the constituency,” said Vanlalruata.