Even when only about 40 out of every 100 Indians in the working-age group look for a job, our economy still is unable to create jobs for them Over the past few weeks, Indians have become more and more worried about the inflation rate (or the rate at which prices are rising). Last month, retail inflation, which is measured by using the Consumer Price Index, for May came in at 6.3% — that is 30 basis points above the highest level of inflation that RBI targets. Later this week, we should have the data for June. These data points will be crucial in determining RBI’s monetary policy stance when it meets in August.

For the most part, public attention has been on the rising oil prices and their impact on the inflation rate.

Oil prices have been high and rising for two broad reasons. One is the rising prices of imported crude oil — India depends on oil imports to meet more than 80% of its domestic requirement — and the other is the taxation of refined fuel within the country.

Internationally, crude oil prices had plummeted below zero in April 2020 — the first such instance in history. But as these prices have picked up, countries, such as India, which are big importers of crude oil, tend to suffer. The prices of the Indian basket of crude oil — that is, the price at which India buys its crude oil — have gone up from less than $20 a barrel in April 2020 to around $65 a barrel as of March-end.

The chart below (Source: CARE Ratings) shows how every 10% increase in oil prices adversely affects India — economic growth falls by 20 basis points (that is, 0.20 percentage points) and the inflation rate goes up by 40 basis points. 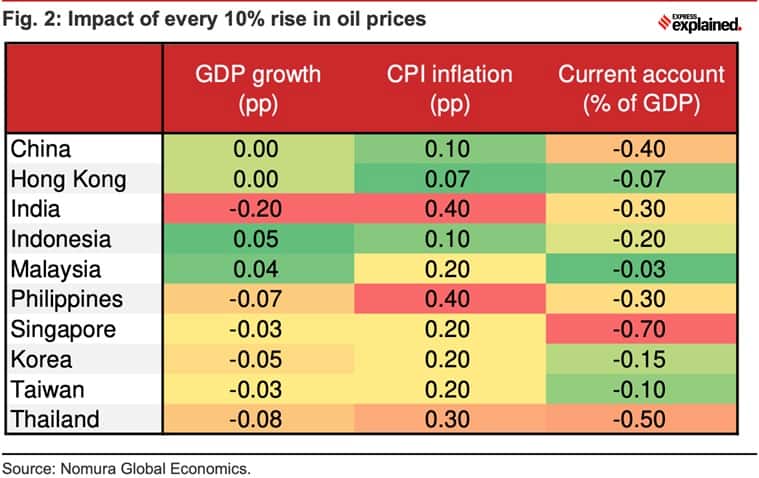 What has made matters worse for the Indian consumers is that — thanks to the way the government taxes petrol and petroleum products — retail prices have stayed up even when crude oil prices went down — see the table below.

Of course, when crude oil prices themselves rise, it becomes a double whammy (see the table below).

But the fact is, as the charts below show, fuel is not the only commodity whose prices are going up fast. These charts look at the spike that was seen in the retail inflation rate in May. Both food and non-food goods have shot up. The red bars show the jump in May and the grey bars show the average jump in the past 3 months.

It is for these reasons that when analysts at Nomura put together the data — across different parameters — for India and other Asian countries to compare, the Indian situation appeared quite poor.

Look at the table below. It maps India and other Asian economies on GDP growth and inflation rate. At the bottom of this table is the Asia average.

On retail inflation, it is quite clear that India is the outlier here. No other country has faced — or expects to face — the high levels of inflation that India is becoming used to. In 2022, consumer prices will grow at a rate that is around two-and-a-half times more than the rest of Asia’s average.

On GDP growth, in 2020, India was more badly hit than almost every other country in the region. It is a matter of relief, however, that if we do not have another wave of Covid cases, India’s economy should be able to grow at a faster clip than others.

Beyond inflation and GDP growth rate, lie the worries of unemployment in India. The table below puts together the data on three key variables that must be mapped.

As the data shows, the participation rate was quite low in India even before Covid. For instance, in India, before Covid, only about 43% of the people in the working-age group were looking for work while in China and Indonesia this proportion was 76% and 69%, respectively. This meant India was not using all its human resources, its demographic dividend.

Now, look at the unemployment rate — the first column in this Table. This is the percentage of people who decided to participate in the workforce, looked for work, but did not get it. The salience of these employment and unemployment numbers is that mere GDP recovery doesn’t always imply a recovery in jobs.

Lastly, why compare India to its Asian peers? Because India has more in common with these countries than it has with the developed economies.