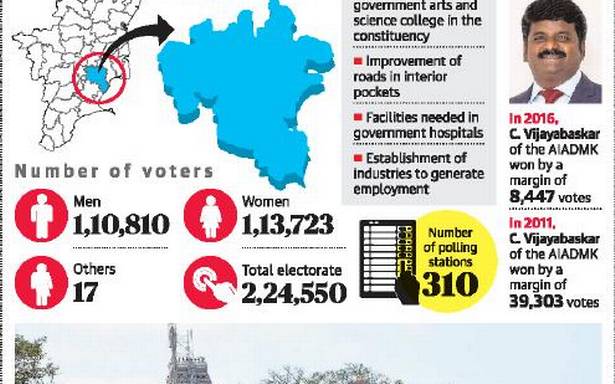 Vijayabaskar banks on a slew of projects for hat-trick in Viralimalai; DMK highlights his ‘corrupt’ deeds

Battling a familiar opponent and anti-incumbency, Health Minister C. Vijayabaskar, who has weathered many a storm under the AIADMK government, is aiming for a third consecutive win from his home turf of Viralimalai in Pudukottai district.

Interestingly, it is the third time in a row for the DMK’s M. Palaniappan, too. Having lost the previous two elections to the Minister, he is mounting an all-out bid to wrest the constituency.

Viralimalai was made a constituency after the delimitation process. This is the third election since 2011. Encompassing over 80 panchayats, three panchayat unions and a couple of town panchayats, Viralimalai is largely a drought-prone constituency, where agriculture is the primary occupation. Kallars and Adi Dravidars are spread all over the constituency, which also has a mix of Agamudaiyars, Udayars, Naickers and Mutharaiyars.

Substantial infrastructure development has taken place in five years in Viralimalai, which houses the famous Sri Subramanya Swamy Temple atop a hillock. However, there are issues which remain to be addressed. While the main roads connecting Viralimalai with Pudukottai and Keeranur have been re-laid, several interior villages do not have good access roads. A Cauvery combined drinking water scheme provides supply even to the interior areas. Yet, the supply is made once in four to six days, depending on the location, say residents. Locals also complain about illicit sand mining from jungle streams in several villages.

The long-pending demand for the establishment of a government arts and science college remains unmet, forcing students to travel to either Tiruchi or Pudukottai for higher education. Lack of jobs has forced many educated youth to go in search of greener pastures. The gem cutting industry, once robust in Viralimalai and Illupur, has been in the doldrums for nearly two decades. Several fabrication units in Mathur are in the grip of recession.

Besides a slew of projects, Dr. Vijayabaskar counts the laying of a ghat road to the Sri Subramanya Swamy temple, atop the Viralimalai hillock, setting up of a Regional Transport Office at Illupur, establishment of a TNSTC depot near Ilupur, creation of a Revenue Divisional Office at Illupur, creation of a separate taluk at Viralimalai, and construction of a new bus stand at Viralimalai among his achievements. He has also organised free eye screening camps under his C.V.B. Foundation, distributed free spectacles and conducted surgeries. He considers the recent laying of the foundation for the Cauvery-Gundar linking project near Viralimalai among his achievements. The drought-prone Pudukottai district will benefit largely, along with a few other southern districts, from the project. His work, especially after Cyclone Gaja and the pandemic, has generated goodwill.

But the DMK camp has been bolstered by party president M.K. Stalin’s blitz against Dr. Vijayabaskar, highlighting his “corrupt” deeds during his campaign. The DMK chose to retain Mr. Palaniappan as he put up a tough fight in 2016 and lost by 8,447 votes. Before he made it to the DMK ticket in 2016, he contested as an Independent in 2011 and polled about 16,000 votes.

Given the high stakes, the arch rivals are engaged in a no-holds-barred contest. There are indications that it would be another close race.