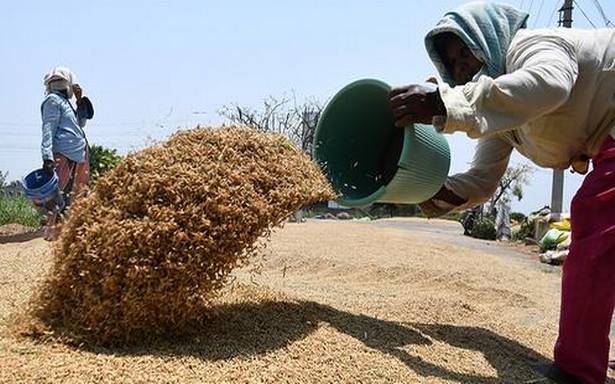 Area under food grains cultivation has increased by 3.9 %

The food grains registered a record of the highest production of 175.12 lakh tonnes after State bifurcation in 2014. Also, the area under food grains cultivation has increased 43.08 lakh hectares in 2020-21 from 41.45 lakh hectares, an increase by 3.9 %.

Andhra Pradesh Agricultural Mission Vice-Chairman M.V.S. Nagi Reddy says that the schemes and programmes are yielding the desired results. “The growth rate in the farm sector mirrors the same. As a whole, ₹35,333.68 crore was spent during the 2019-20 and 2020-21 financial years for the procurement of nearly 178 lakh metric tonnes of farm produce. During the last 24 months, ₹51,366.98 crore have been disbursed to the stakeholders of agriculture and its allied sector including farmers through direct benefit transfer (DBT),” he says.

Mission Executive Member M. Chandrasekhar Reddy says that about 18.70 lakh connections were provided free power for nine hours to farmers. “The government spent ₹19,130 crore during 2019-20 fiscal including clearing the pending dues of ₹8,750 crore accumulated during the TDP rule. With this, the farmers created 40 to 60 labour days. Also, the share of agriculture in GVA (gross value added is a measure of goods and services produced in an area or sector) is 37.27 % when compared to 19.7 % of national average, he says.