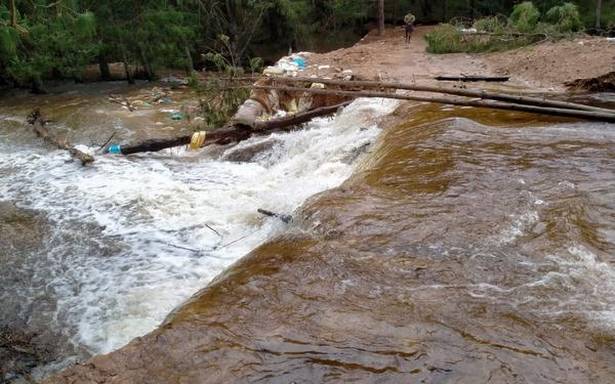 Rainwater filled in lake gets drained, villagers complain to Collector

The farmers in Polur in Poondi panchayat in the upper hills here have appealed to the forest officials to immediately carry out repairs on the 50-acre Varancanal lake as there was an urgent need to strengthen the bund since 90 % of the water stored in the waterbody had drained due to weak bund.

The lake, according to the villagers, is the prime source of water for drinking and also for irrigation, they said in a memorandum submitted to Collector M Vijayalakshmi on Monday.

They said that despite taking up with the local forest officials to repair the bund last year, when there was no response, the villagers came together and repaired the leaks. However, the natural lake, which runs to 220 metre length and five metre high, could not retain the water as the leak continued. "Close to 90 % of rainwater drained…" they claimed in the petition.

There are about 500 habitations in and around Poondi panchayat. The farmers mainly raised garlic, carrot, beans, radish, green peas, potato and beetroot among other vegetables. For both irrigation and drinking purposes, the entire population relied on the lake.

With widespread rain recently in the western ghats, the lake was filled with water, but as the repairs had not been carried out, the leaks had resulted in draining of the water.

When The Hindu contacted Cooperation Minister I Periasami in Dindigul, he assured to discuss the issue with the officials concerned and get the works done on a war-footing.