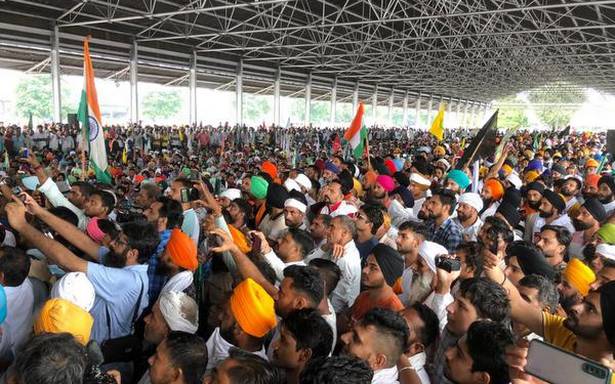 They demand probe into police action on protesters

Tens of thousands of farmers, led by the central leadership of the Samyukt Kisan Morcha, including Rakesh Tikait, Yogendra Yadav and Gurnam Singh Charuni, laid siege to the mini-Secretariat at Karnal on Tuesday evening. The sit-in followed after the talks between the farmer leaders and the district administration over the brutal police baton-charge of farmers a week ago broke down.

Mr. Yadav, talking to the media, said the talks failed after the administration refused to agree to the farmers’ minimum demand for an inquiry against IAS officer Ayush Sinha for ordering the police to “crack the heads” of farmers, and suspend him pending an inquiry.

The other demands included compensation to the injured farmers and a government job to the next of the kin of farmer Sushil Kajal, who died during the lathicharge, said Inderjit Singh, vice-president, All-India Kisan Sabha, Harayana, who was part of the 15-member delegation that held talks with the administration.

As the two-hour-long talks failed, the farmers, who had gathered in huge numbers at the grain market marched to the mini-Secretariat housing offices of the district administration. They broke through barricades and ignored water cannons to enter the premises. At the time of going to press, the sit-in was continuing.

Amid the protests, Congress general secretary Randeep Surjewala said, “Modiji, Khattar sahib, if the government can go to Doha and talk to Taliban, why can’t it talk to our annadatas who are peacefully protesting for the 10 months on the borders of Delhi?”