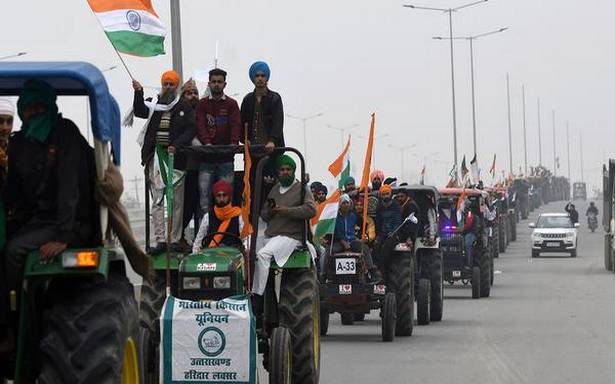 Protesting farmers who took part in tractor rallies on the expressways surrounding Delhi on Thursday emphasised that it was only a “dress rehearsal” for the parallel parade that they plan to hold within the capital on Republic Day. They urged the Centre to accept their demands for repeal of three farm laws and a legal guarantee for minimum support prices at Friday’s negotiations.

The tractor march started simultaneously from four different points around 11 a.m. in the morning, with each group returning to their starting points around 4 p.m. More than 5,000 tractors took part, according to a statement from the Samyukt Kisan Morcha, a joint front coordinating the protests. Protesters also joined in buses and private vehicles. However, there was a no-show from a fifth group at Rewasan, as its leaders were detained by the Haryana Police.

“This was just a trailer, the complete picture will be shown on Republic Day,” said Rakesh Tikait, national spokesperson for one faction of the Bharatiya Kisan Union (BKU-Tikait), who led hundreds of tractors from Ghazipur on the Delhi-Uttar Pradesh border, travelling along the Eastern Peripheral Expressway. He said the government could test the farmers as much as it wanted but the farmers would not go home before the farm laws were repealed. “The government still has a day to ponder over repealing the three laws and forming a new law, guaranteeing the MSP,” he added.

Farmers from various parts of U.P. continued to join the group as they progressed towards Palwal in Haryana. Minor skirmishes between farmers and policemen were reported in Bulandshahr and Gautam Buddha Nagar when farmers veered off from the prescribed route, leading to traffic snarls. Iraj Raja, Superintendent of Police (Rural), Ghaziabad said no permission was sought for the rally but “the administration was in no mood of confrontation as long as there is no law-and-order problem. We had put more policemen on the ground to ensure smooth flow of traffic”.

Another group was supposed to have come from Rewasan in Nuh district to join them in Palwal, but failed to get started. Mewat Vikas Sabha president Salamudeen Meo said that All-India Mewati Samaj president Ramzan Chaudhary was detained by Nuh Police on Thursday morning, and three other farmer leaders put under house arrest, preventing the rally. Narendra Bijarniya, Superintendent of Police, Nuh, said that only Mr. Chaudhary was detained and let off in the evening.

On the other side of Delhi, larger groups gathered at Tikri, Kundli and Dhandsa on the border with Haryana and moved towards each other, completely jamming one side of the three-lane Western Peripheral Expressway for a stretch of several kilometres. “The farmers have come together and taken out this road show for a reason. We want the government to listen to us and accept our demands. This agitation will continue unless the laws are repealed,” said Angrez Singh, a farmer from Punjab’s Firozpur district, travelling on a tractor heading from Kundli towards Tikri.

According to organisers, the rally on the 270 km expressway ringing Delhi was echoed by similar tractor marches held in many districts of Punjab, Haryana and U.P., as well as protests in Rajasthan, Maharashtra, Gujarat, Madhya Pradesh, Uttarakhand and Bihar. They hope to rally similar nationwide support for Republic Day, unless a solution is found at the negotiating table instead.

Rashtriya Kisan Mahasangh spokesperson Abhimanyu Kohar was on the road from Kundli on Thursday, and will be in the conference room at Vigyan Bhavan for the eighth round of talks with Central Ministers by Friday afternoon. “I hope this government is looking at the determination and sacrifice that the farmers displayed today and every day since the protests started, and I hope that they will now take us seriously. There is serious anger growing among farmers. If they don’t accede to our demands, then they may face serious political consequences in the future,” he said.