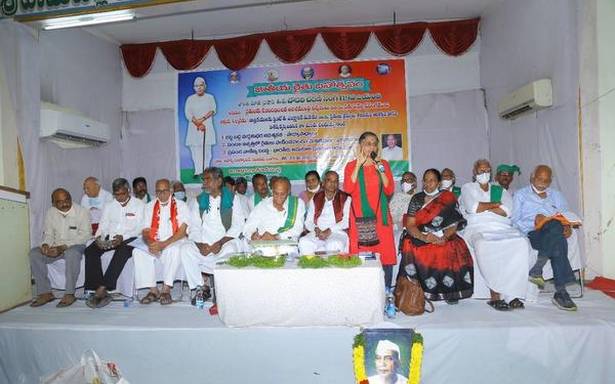 Enthused by the Centre withdrawing the three farm laws, farmers on Thursday vowed to step up stir seeking statutory backing for the minimum support price regime and press for continuing various subsidies, including free power to farm sector.

Celebrating the National Farmers’ Day after paying floral tributes to former Prime Minister Chaudhary Charan Singh, a champion of farmers’ cause, on his 117th birth anniversary, Samyukta Kisan Morcha State convener Vadde Sobhanadreeswara Rao said the stir which culminated in the scrapping of the farm laws was only a beginning. There was still a long way to go to change the ‘anti-farmer’ policies. India and China should join hands to oppose the World Trade Organisation (WTO) regime and continue subsidies on farm inputs in a big way as a majority of the farmers came under the category of resource-poor persons in these countries.

Alliance for Sustainable and Holistic Agriculture founder convener Kuruganti Kavitha underscored the need for ensuring income security for farmers and a fair deal for women farm workers eking out a livelihood in farms.

Farmers should be ensured at least C2 plus 50% as minimum support price as per the recommendation of the Ramesh Chand Committee, opined Ms. Kavitha, a committee member. Those growing oilseeds and pulses should be provided with C2 plus 70% for achieving import substitution and saving foreign exchange, she opined.

All India Kisan Sabha national president Ravula Venkaiah demanded constitution of a debt relief commission to come to the rescue of farmers who were on the verge of committing suicide, thanks to consumer-centric price fixation policy for farm produce. Elderly farmers crossing the age of 60 years should be provided pension and group medical insurance.

Andhra Pradesh Rythu Sangham leader S. Jhansi said the Dam Safety Act enacted by Parliament would be opposed as the Centre allegedly intended to hand over the reservoirs to multinational corporations on the pretext of maintenance and impose commercial user charges on irrigation and drinking water.