The massive agitation by farmers against the new farm laws has stretched to over 40 days at Singhu Border of Delhi and Haryana, but two things that they haven’t run out of are food and an unrelenting spirit.

While the centre stage of this protracted battle remains the streets, the fire in the belly of these farmers has been sustained by the flames burning in the kitchens backstage.

Aggrieved farmers, mostly drawn from Punjab, had arrived at Singhu Border on November 26, answering the ‘Dilli Chalo’ call of their leaders who are seeking repeal of the three new farm laws which they allege will “wreck the lives of hard-working peasants”.

On a long stretch straddling the Delhi-Haryana border, fiery speeches on stage, songs of resistance in the streets and and cries of ‘Sadda Haq, Aithe Rakh’ and ‘Jo Bole So Nihal’ are part of the daily life at the protest site now.

Community kitchens or ‘langars’ punctuate the sea of farmers who have descended on the site and are in no mood to relent or retreat until their demands are met by the Centre. 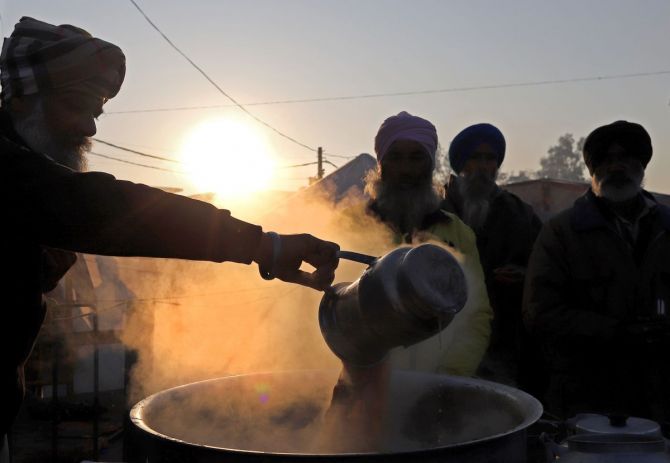 Palwinder Singh, 45, a farmer from Gurdaspur, had arrived at Singhu Border on day one of the protest along with a ‘jatha’ to set up a kitchen right in the middle of the highway.

He begins his day early, every morning by taking bath in the open in biting cold and offering prayers to the “Wahe Guru”.

“A revolution cannot run on empty stomachs. We are farmers who follow teachings of our revered Sikh Gurus, and this is Guru ka Langar, all his grace and we are just the agents of his will. So we are keeping the fire burning in the kitchen,” Palwinder said.

All men and women running makeshift kitchens at the protest site refuse to take any credit for the ‘sewa’ they are offering for over 40 days now.

“We came here knowing we will face tear gas and water cannons, but we were ready for the long haul, and so brought vegetables and food supplies with us. We are not feeding just men and women, we are feeding a revolution,” Palwinder asserted.

About 200 people work in multiple shifts at the kitchen where he works, a big ‘roti’ maker is installed in the middle of the area while the trolley of a tractor serves as the site to heat cauldrons to cook vegetables, ‘puri’ and other food items.

At the front stalls of these kitchens, people of all social stations, rich and poor, queue up to collect food with folded hands.

These kitchens are steaming up ‘puri’, vegetables, rice, ‘kheer’, ‘prasad’ (halwa) and much more to satisfy anyone’s tummy and palate. 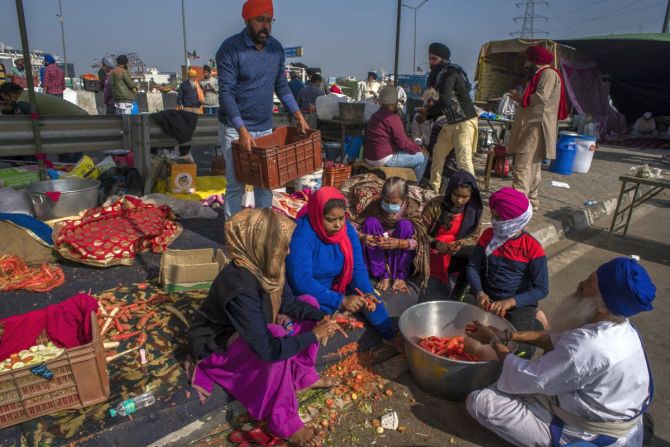 Before the rains, people would sit on ground to partake the meal offered by the langars.

At a kitchen close to the Delhi side of the border, women with their heads draped in matching ‘kesariya’ fabric are cooking ‘rotis’ on a giant ‘tava’ and singing songs together in Punjabi, assisted in between by young boys and girls.

“Our Guru Nanak Dev Ji had started the Guru ka Langar and it is still continuing. It is over 40 days of protest now, but has the kitchen fire stopped burning? Has the ration run dry? Has anyone slept hungry here,” said one of the women from the kitchen.

Most sewadars choose to remain anonymous while rendering services and want people to understand the “plight of farmers”, saying the fight must go on.

Next to the ladies’ kitchen is a stall for ‘shardai’, a traditional sweet drink of Punjab region, which everyone is getting to taste at the protest site.

Men holding long and heavy wood logs use it to crush a mix of almonds, dry fruits and khas-khas into a paste, which is then sent for treatment with water and then filtered with a cotton cloth.

At the stall in the front, people line up behind a rope and pick up bowls to get a serving of this tasty, white beverage. But, it’s not just the kitchens where food is being offered, an army of volunteers walk around lugging a stock of bananas and distribute it to people sitting on protests and bystanders as well, as leaders belt out fiery speeches on stage. 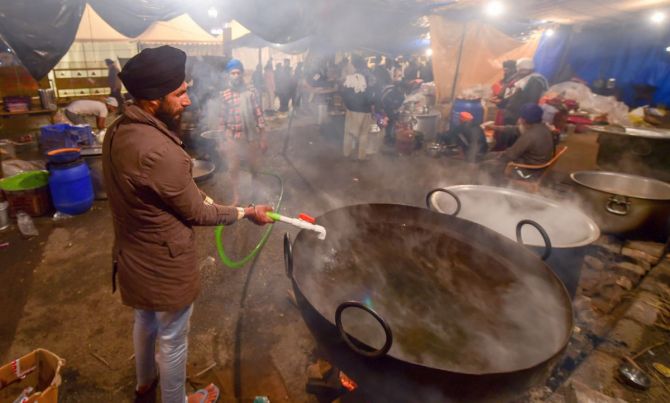 Punjabi singer Sandhu Surjit, a former sarpanch, who had been coming to the Singhu Border protest site a couple of times said, “Our spirit is ‘Sangat’ and ‘Pangat’, and so we are protesting but also feeding people without discrimination.”

“In a langar, poor or rich, all are welcome. Those who go to a langar, their caste, creed, region, religion, or any affiliation to any institution or organisation is not asked. If people from the government come here, we will also offer them food,” he said.

Even these jawans and police personnel are “sons of the soil” and “children of farmers”, and while they may be doing their duties, many have also sat and ate ‘langars’ and even offered sewa, the singer said. 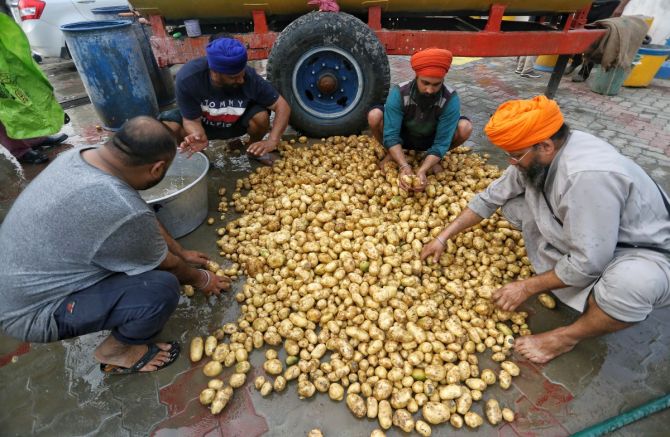 Dalbir Singh, 65, a farmer from Panipat, who had been taking part in the agitation said any movement or agitation or revolution survives on “merit, spirit and food in the stomach”.

“If these kitchens were not there, how would this fight have been sustained. But, there have been so many kind people, not just the gurdwaras nearby, but ordinary people have come and offered, vegetables, milk, rice and physical labour to assist us,” he said.

Farmer Palwinder, when asked where he rests when tired, pointed to a small makeshift cabin at the rear end of the kitchen and said “we take turns to rest”.

“Every morning when I wake up, we pray to Wahe Guru ji to bring welfare not for farmers but all mankind. I am hopeful the government will finally listen to us,” he said.