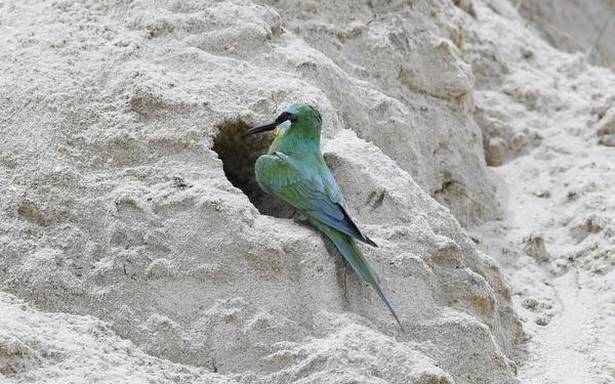 Environmentalists and birdwatchers were excited to discover a good number of blue-cheeked bee-eaters nesting in a heap of sand close to the Thottappally harbour, probably for the first time in this part of the region, in May-June 2020.

They were so thrilled that members of the Green Roots Nature Conservation Forum, a conservation group based at Thottappally, raised a temporary fence around the pile of sand to protect some 35 nests and 70 birds.

This year too the migratory birds have come to Thottappally, but are fewer in number with environmentalists raising concerns over the ongoing “indiscriminate” mineral sand-mining at the estuary.

“We have so far noticed only three nests and less than 10 birds. A portion of the sand that served as nesting ground for them last year has been removed. Besides, the place is now filled with the noise of excavators engaged in mineral sand-mining. At present, there are hardly any favourable conditions for the birds to nest and breed at Thottappally,” says Saji Jayamohan, secretary of the forum.

After a lull, dredging and removal of mineral-rich sand from the estuary was revived recently. According to officials, the sand is being removed to ensure smooth flow of floodwaters from Kuttanad into the sea. However, the local people are opposed to the transportation of the mineral-rich sand. They allege the government is engaged in large-scale mineral sand-mining in the name of flood mitigation, which, according to them, is creating serious implications to people living along the coast and environmental degradation. The removed sand was being transported to Kerala Minerals and Metals Limited’s unit at Chavara.

Apart from being a nesting ground for migratory birds, the Thottappally coast has long been one of the prime locations for egg-laying Olive Ridley turtles, which are legally protected under Schedule I of the Wildlife Protection Act, 1972.

“The mineral sand-mining was first started at the Thottappally harbour in the last decade in the name of its development. Last year, the government extended mining to the nearby Thottappally estuary. The actions are posing a major threat to the nesting of turtles and spelling doom for the ecology of the area. This time we stumbled upon only five nests of Olive Ridleys during the entire season,” Mr. Jayamohan says.