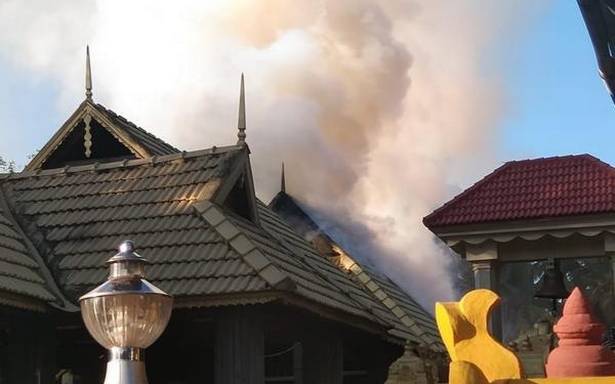 Devotees chip in to douse the flame; ministers and MLAs visit the shrine

A fire broke out in the sanctum sanctorum of Mandaikadu Sri Bhagavathi Amman Temple on Wednesday and damaged the timber and tiles in the 15-foot-tall roof.

After it was closed on Tuesday night following usual prayers, the temple was opened on Wednesday morning and priests came out of the temple around 6.45 a.m. after performing usual ‘deeparadhana.’ When a devotee, who was offering prayers from the road in front of the shrine, noticed smoke billowing from the roof of sanctum sanctorum around 7 a.m., he alerted others.

Fire and Rescue Services personnel from Nagercoil, Thuckalay and Colachel rushed to the spot to douse the flame that destroyed a portion of the timber and tiles in the roof and silk saris offered to the deity by devotees. As the devotees too joined the fire-fighting exercise, the flame was doused with ease.

The devotees complained that the flame from the hanging lamps in the sanctum sanctorum might have caused the mishap while the temple authorities claimed that electric short circuit could have triggered the accident.

“We’ve brought it to the notice of the Chief Minister, who has ordered for the immediate restoration of the damaged portions following the inspection to be done by Minister for Hindu Religious and Charitable Endowment P.K. Sekar Babu within a couple of days,” Mr. Mano Thangaraj said.

He said remedial rituals would be carried out as per ‘ahama’ and a comprehensive probe conducted to ascertain the reason for the accident.

Former Union Minister Pon. Radhakrishnan who visited the temple after the mishap, complained that the carelessness of the temple official had caused the fire accident.

“The temple administration should conduct ‘prasannam’ as per Kerala tradition and perform remedial rituals,” he said.