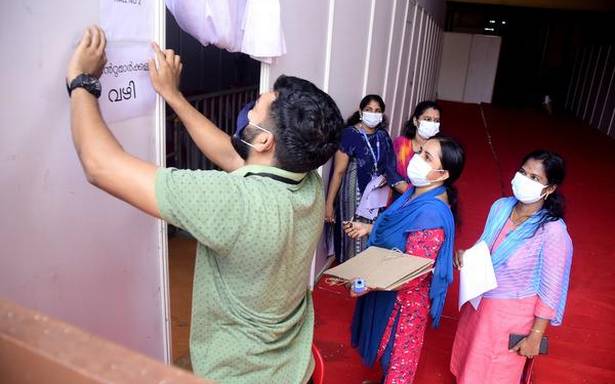 After almost a month-long wait, the counting of votes polled in the Assembly elections will be held at 13 centres in Kozhikode district on Sunday.

Elaborate arrangements have been made by the District Election Office to provide the latest results to the public. The counting of postal votes will begin at 8 a.m. The progress of counting will be available on the website of the Election Commission of India ( https:results.eci.gov.in ).

The first leads in the 13 Assembly segments will be known by 8.30 a.m. Unlike the previous elections, the number of postal votes has gone up this time. Thus even before the completion of counting of postal votes, the counting of votes polled in electronic voting machines (EVMs) will begin at 8.15 a.m.

However, the final results will be delayed on account of the huge number of postal votes as well as the increase in the number of counting tables in line with the COVID-19 protocol.

Each of the 13 Assembly constituencies will have 28 tables for counting. One round will be completed when the votes are on those 28 tables. The results will be announced after each round.

After all the rounds are over, the Voter Verifiable Paper Audit Trail (VVPAT) from five randomised booths will be counted. After the counting of postal votes, the Returning Officer will hand over the certificate to the winning candidate.

Official sources said the randomisation of employees for each counting table would be completed at 5 a.m. Employees deputed for counting duty should report at the centres at 6 a.m. They will have to take an oath of secrecy before the counting of votes.

Subsequently, postal ballots will be opened in the presence of the representatives of political parties. Similarly, the strong room where the EVMs are stored will be opened.

Postal votes of employees deployed for election duty will be accepted till 8 a.m. All postal votes will be counted on separate tables. Each constituency has six to 12 tables for the purpose.