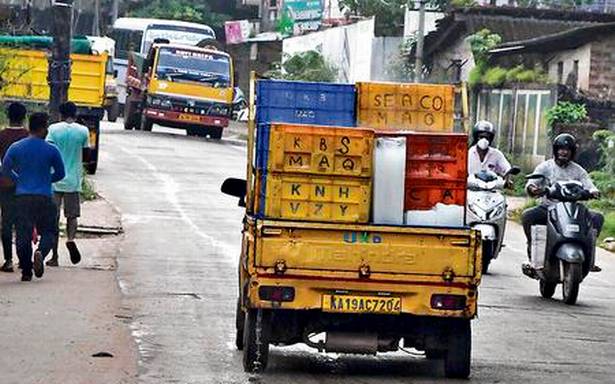 Instead of storing wastewater in retro-fitted tanks, transporters spill it all along the road

Fish wastewater menace has again come to haunt the city residents as well as users of roads and highways with the beginning of the fishing season coupled with near-end of the south-west monsoon season.

Trucks as well as mini goods vehicles that transport fish primarily from the Mangaluru Old Port (Bunder) spill wastewater right from Bunder all along the trunk roads of the city and further on the National Highways. The impunity with which the transporters operate now and the lack of enforcement are quite visible as fish transporting trucks fitted with twin wastewater tanks had almost stopped spilling wastewater in the last couple of years.

Social activist Nemu Kottari from Jeppu, who was regular at the weekly phone-in programmes of the city police that were conducted till December 2019, and other residents were able to convince the police of the need to curb wastewater menace to a considerable extent. He recalled the then Commissioner T.R. Suresh warning seizure of fish transporting vehicles if they were found spilling wastewater and said that the traffic police were then able to contain the menace to a large extent.

Fish transporters use mainly three exists from Bunder — Kulur Ferry Road towards Udupi, Mangaladevi Road and Jeppu towards Kerala and Mercara Trunk Road towards B.C. Road and beyond. All the arterial roads within the city and National Highways 66, 75 and 169 are dotted with wastewater spillage throughout.

Manjunath Nayak, a resident of Kudroli said that besides filling the surroundings with foul smell, wastewater on the road is highly dangerous for two-wheeler riders as well as other road users. As wastewater is slippery in nature, two-wheeler riders often fall because of skidding, he said.

Mr. Kottari said that the local bodies, including city corporations and municipalities, are bound to provide wastewater dumping areas for fish transporters as per relevant Acts governing their functioning. None of them have provided them thereby forcing transporters to create civic nuisance en route, he regretted.

Added to the wastewater menace, transporting of decayed fish to fish meal factories too has been causing foul smell across the city, Mr. Kottari added.

Police Commissioner N. Shashi Kumar said that he will look into the issue.