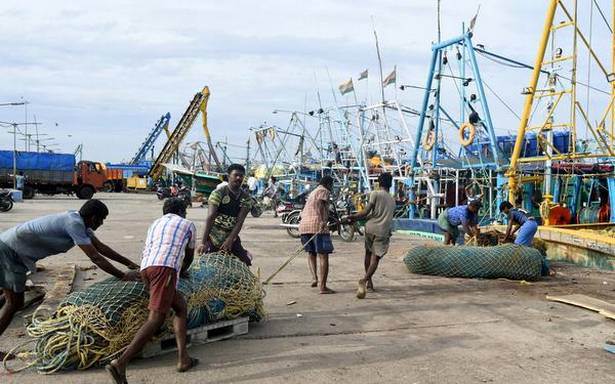 Boat owners in Kasimedu say they have been forced to take huge loans; high diesel costs and exporters not paying adequately for fish, are contributing to their problems

Bogged down by loans, boat owners in Kasimedu have urged the State government to provide them with financial support. With banks not stepping in, many of them have been forced to take loans of up to ₹10 lakh to go on fishing.

“Last year, the then State government had attempted to get us loans through Kisan credit cards. However, the banks refused to cooperate and the scheme did not take off in the fisheries sector. Those exporters, who buy fish from Kasimedu pay much lesser than what is due to the boat owners, citing various reasons including the loans taken by them,” said community leader M. E. Raghupathi.

Coupled with low fish rates and high prices of diesel, only 40% of boats are going on fishing voyages. “Since the voyages have become longer, we need to spend more on diesel, ice, provisions for the men and payments. Earlier we used to have week-long voyages, but now they are for 20-25 days. The boats venture into deeper seas meaning they have to be bigger to withstand the voyages. They cost around ₹1 crore, which is no small amount and there is no financial assistance from the formal sector,” said Varadhan, another community leader.

K. Bharathi of the South Indian Fishermen Association said that the need of the hour was a bank for fishermen. The State should create one on the lines of agricultural cooperative banks. Until then, the government should provide assistance in the form of reducing diesel prices and also short-term loans through the Tamil Nadu Fisheries Development Corporation. The department can also impress upon the exporters to increase the price according to the grade, he said.

Sources in the Fisheries Department said that a meeting of boat owners and exporters would be convened shortly.