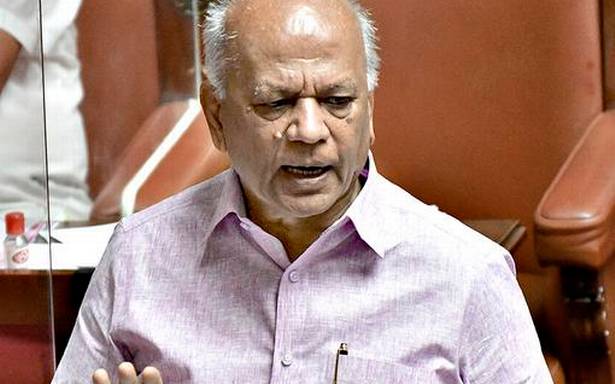 C.M. Ibrahim, Nazeer Ahmed have evinced interest in the post

With senior Congress leader and Leader of the Opposition in the Legislative Council S.R. Patil set to retire on January 5, an informal group of Muslim legislators is learnt to be lobbying with the Congress leadership to nominate a Muslim MLC for the post.

While senior Congress leader B.K. Hariprasad, former Minister R.B. Thimmapur, and former KPCC president Allam Veerabhadrappa are keen on the post, the Muslim Legislators’ Forum, an informal group of seven MLAs and three MLCs in the Congress, wants to nominate an MLC from the community. Among Muslim MLCs who have evinced interest include senior leaders C.M. Ibrahim and Nazeer Ahmed, sources said.

A four-time MLC from Vijayapura, Mr. Patil was denied party ticket to contest this elections.

“Muslims have stood behind the Congress for long. It is time the community be represented in power. We have conveyed our wish to the party leadership and the high command is aware too,” a senior Muslim legislator told The Hindu. The legislator said it was time that the community was rewarded.

The perceived rift between former Chief Minister Siddaramaiah and Mr. Ibrahim seems to have been buried for optics, sources said. Incidentally, both met in Bengaluru before the Belagavi legislature session.

Another source pointed out that Mr. Ibrahim had made his moves to leave the Congress and join the JD(S) since he felt neglected. He met JD(S) leader H.D. Kumaraswamy many times fuelling speculations that he could be appointed president of the regional party. “Many in the party feel Mr. Ibrahim should not be let go since it would send a wrong signal to the community,” sources said.

Meanwhile, sources close to Mr. Siddaramaiah and KPCC president D.K. Shivakumar acknowledged that the names of Mr. Ibrahim and Mr. Hariprasad had been discussed informally in the party. “Ultimately, the high command will decide,” sources said.

The party has time to select a new Leader of the Opposition till the next legislature session is convened, sources said.