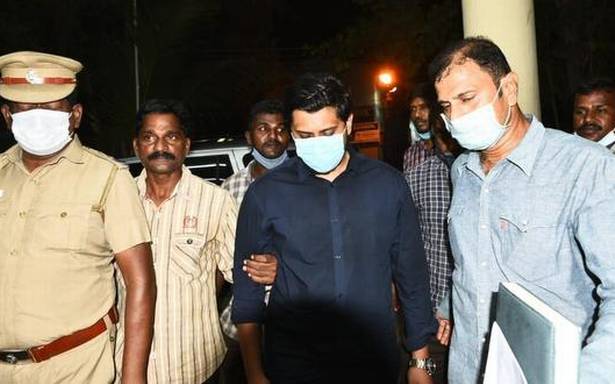 The doctor and his associates had procured the drug from a staff member of the government hospital in Tiruvannamalai, who was also arrested

Tambaram police on Friday arrested four persons including a young doctor as well as a staff member of the Government Hospital in Tiruvannamalai, for allegedly stocking the drug Remdesivir (used in COVID-19 treatment) to sell at high prices on the black market.

Following information that a gang, including a doctor and his associates were indulging in the illegal act, a special team of police personnel led by Superintendent of Police, Civil Supplies CID S. Santhi caught two persons operating clandestinely in a car near a private hospital on Thursday evening.

Ms. Santhi told The Hindu, “Based on the information, we caught the duo first near the hospital. Our preliminary investigation revealed that Mohammed Imrankhan, 25 who has finished MBBS recently and his friend Vijay, who was his school mate and a fruit seller, procured Remdesivir from Vignesh, a staff member at the Government Hospital, Tiruvannamalai for ₹8,000, though its maximum retail price is ₹4808. While they were planning to sell it for ₹20,000, we caught them and handed them over to the Tambaram police for further investigations. Seventeen vials of Remdesivir were seized from them.”

Imrankhan, his associates Vijay, 27 of Pallikaranai, Rajkumar, 33 of Thiruthani and Vignesh, 27, of Tiruvannamalai were arrested.