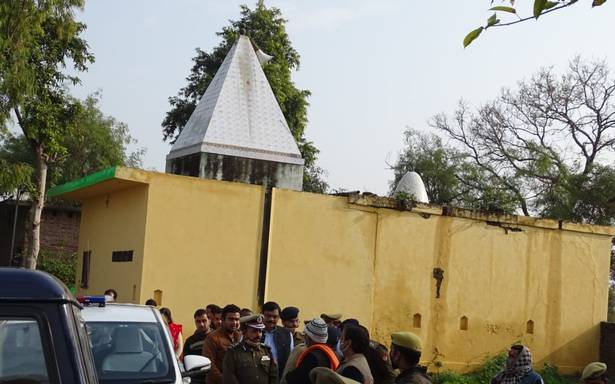 A station house officer has been suspended for “insensitivity” and “delaying the due process”.

A 50-year-old Anganwadi worker died after she was gang-raped, allegedly by a priest and his two aides, in a village in Ughaiti area of Budaun, Uttar Pradesh, on the night of January 3. However, an FIR was registered only on January 5 after a post-mortem confirmed severe injuries to her private parts.

Two of the three accused have been arrested, but the main accused is absconding.

The SHO (station house officer) of Ughaiti has been suspended by the SSP, Budaun, for “insensitivity” and “delaying the due process”.

The woman’s son told reporters that she used to go to the village temple which, according to locals, is more like an ashram. “On Sunday, she went to her mother’s place, and while returning, followed her routine practice. At around 11.30 p.m., the priest and his two aides brought her home in a car. They said she fell into the dry well on the ashram premises. She was bleeding profusely and soon she died. Before we could ask anything, the three left,” he said.”

He alleged that priest Satya Narayan (45) and his aides, Jaspal and Vedram, were lying as they didn’t take her to hospital. “We approached the police as we felt somebody had raped her but the police didn’t help,” he said.

In the complaint to the police, the woman’s husband said he requested the priest to take her to hospital as she was still alive but they refused and ran away.

Locals said a video of the priest where he could be heard saying she fell into the well was circulating in the local media but the police could not nab him. They said the well was in an isolated area on the premises and not at a place where somebody could fall in it by accident.

“The SHO also believed the theory of the accused till the post-mortem report revealed that she had been brutalised,” said social activist Shafi Ahmed.

It took the police more than 18 hours to take the body to the mortuary. “It was around noon on Monday that the police received a call on 112 and by the time the body reached the mortuary, it was evening. So, the post-mortem was conducted on Tuesday and an FIR was registered under sections 302 and 376D of the IPC,” Sankalp Sharma, SSP, Budaun, told The Hindu.

Mr. Sharma said initially both the SHO and the family members believed the theory of the priest because he himself brought the body to the victim’s residence. “It was when the family realised that she was bleeding from private parts that they approached the police. In fact, tehreer [complaint] came to us on Tuesday when I insisted. But the SHO should have been much more sensitive and alert,” he stated.

Yashpal Singh, CMO, Budaun, said prima facie it seemed like a case of rape. “There were injuries on the private parts. Her ribs were broken and there was a fracture in one leg.” Dr. Singh said the injuries suggested that she was dragged. “There was excessive bleeding and death was because of shock. The viscera has been preserved and the sample has been sent to the forensic lab,” he added.

District Magistrate Kumar Prashant said the case would be heard in a fast-track court and all possible government help would be provided to the victim’s family.

Taking note of the case, Chief Minister Yogi Adityanath directed ADG Bareilly to visit the spot and submit a report on the incident.

In what appears like an adverse comment on the ability of the local administration, the U.P. Special Task Force has also been instructed to provide assistance in the investigation of the case.

The incident created a massive outrage on social media and Opposition parties took the government to task. A delegation of the local Congress unit met the victim’s family and promised all possible support.