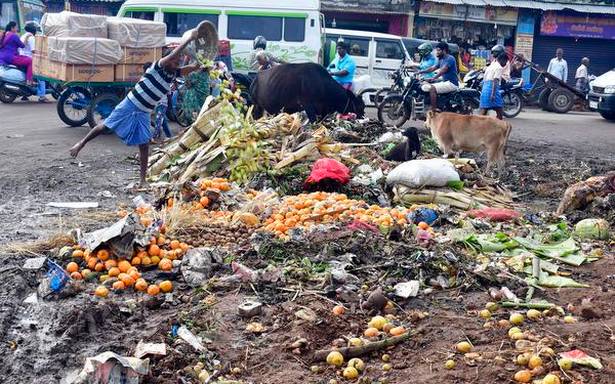 Garbage strewn along the back entrance of the Gandhi Market caused a traffic snarl on Friday morning. Vendors had dumped fruit and vegetable waste onto the road leaving it to the sanitary workers of the civic body to clean up.

Rotten vegetables, fruit and other waste were piled up at the crossroad between East Boulevard Road and Thanjavur Road where trucks, buses and two-wheelers ply throughout the day.

“The road is already small and the garbage dump has taken up more than half the space, forcing vehicles to manoeuvre through the available space”, a traffic policeman stationed at the spot said.

A sanitary worker of the Tiruchi Corporation said that while there existed some space for the vendors to dump waste within the market complex, it often overflows, because of which they dump it here. “At night when the load-carrying trucks bring the fruit and vegetables, the vendors sort them and dump them here on the spot. It is our headache to clean it after that,” she said.

Some vendors were seen bringing waste and dumping it even as vehicles criss-crossed behind them. “We have nowhere else to put the waste. The civic body must allot a specific place where we can put the waste, and from where their workers can collect it. We need the workers to collect the waste at least twice in a day,” Murugesan, a vegetable vendor said.