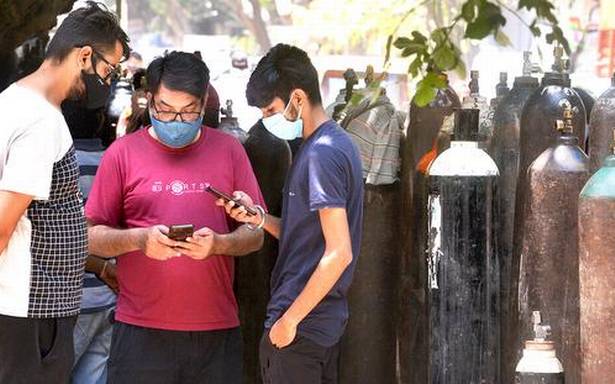 Instead of 976 MT, Capital was allotted 433 MT on Monday, says oxygen bulletin

The Delhi government said it was getting an average of 40% of the total demand of oxygen for the Capital from the Central government in the first oxygen bulletin that it released on Tuesday.

Aam Aadmi Party MLA Raghav Chadha, releasing the bulletin, said: “We need 976 metric tonnes (MT) of oxygen, while what we received on Monday from the Centre was only 433 MT. This is only 44% of what we need and what we have demanded from them.”

He added that over the past seven days, the average oxygen supply received by the city is 393 MT against the demand of 976 MT which is 40% of the total demand.

‘By hook or by crook’

Sharing details about how the government was trying to overcome the shortage of oxygen through better management so that no lives are lost, Mr. Chadha said that on Monday, the government responded to 41 SOS calls, which were raised through various mediums, including social media, phone calls, and helplines from hospitals, and ensured that oxygen was supplied to all of them by “hook or crook”.

“We have made a few SOS reserves, through which we supply the oxygen to those hospitals who are on the verge of exhaustion. Liquid Medical Oxygen (LMO) is supplied through oxygen tankers to large-scale hospitals. In small-scale hospitals, which have fewer than 50 beds and can suffice with oxygen cylinders, we supply the big D-type oxygen cylinder in an adequate amount. This lets them comfortably overcome the crisis and emergency situation and ensure that the proceeding supply is made regular,” Mr. Chadha said.

On Monday, he said the 41 hospitals that raised an SOS had 7,142 patients on oxygen support beds and 21.3 MT of oxygen was supplied from emergency reserves.

The government, he said, had decided that it was necessary to put out all the figures with utmost transparency in front of the people. “[Like] The amount of oxygen we received in the past week, the number of SOS calls we addressed, and how we are actually dealing with them on a 24×7 basis through adequate communication, facilitation of oxygen, and successfully tackling the concerns of people,” he said, adding that the oxygen bulletin is an attempt to make every detail public.

Mr. Chadha said the gap of 56% between demand and supply in oxygen supply still exists, and the faster we bridge it, the quicker the SOS calls will decrease. He added that the shortage of oxygen in the city was coming in the way of setting up more oxygen beds.