At least 53 participating candidates were hired on the spot, while 16 more were shortlisted against a total of 110 vacancies that were on offer. 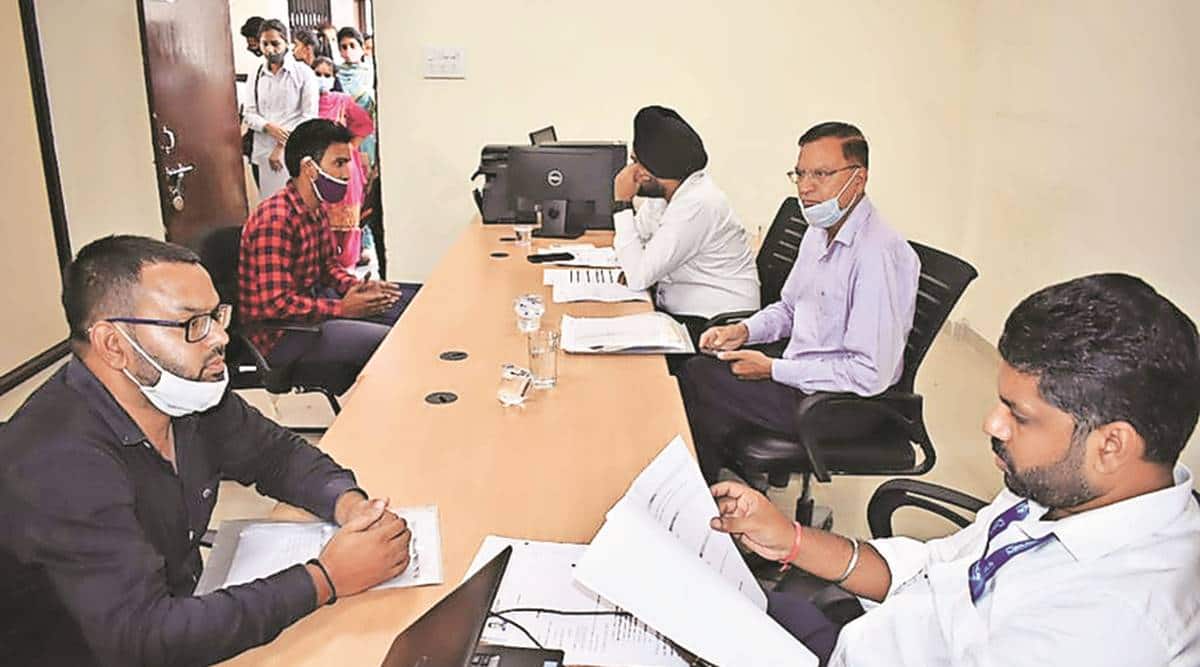 THE DISTRICT administration of Hoshiarpur, in collaboration with the District Bureau of Employment and Enterprises (DBEE), on Thursday, organised a day-long ‘high-end’ Rozgar Mela (Employment Fair) under the much-touted ‘Ghar Ghar Rozgar’ scheme of the Punjab government for aspirants in the banking and financial sectors.

At least 53 participating candidates were hired on the spot, while 16 more were shortlisted against a total of 110 vacancies that were on offer.

The aspirants selected have been offered packages between Rs 2 lakh to Rs 6 lakh per annum, depending upon their qualifications, nature of the job, and previous work experiences.

Officials of Hoshiarpur said that the ‘high-end’ Rozgar Mela was held just to dispel the notion that under the Ghar Ghar Rozgar scheme, only low-grade jobs are provided to the aspirants that came with a monthly salary between Rs 7000 to Rs 10,000 only.

The companies together were looking to fill up a total of 110 vacancies. A total of 230 aspirants participated in the job fair, out of which 53 were selected on the spot, with another 16 being shortlisted. The shortlisted candidates may be subjected to another round of interviews for completion of their selection procedure.

Officials said that one aspirant of the 230 who applied was selected by at least four companies.

Deputy Commissioner, Hoshiarpur, Apneet Riyait, said that in the job fair mostly postgraduate students, including those who held MBA, MCA, MSC (Agriculture), MA degrees had participated because the event was meant for providing ‘high-end’ employment opportunities.

“Earlier, we used to organise employment fairs for aspirants with all kinds of qualifications – from Class 10 to postgraduates. But this job fair was a little different because here we wanted to focus only on aspirants who had high educational qualifications,” Riyait said.

“An unemployed person may have any educational qualification. Our motive is to provide job opportunities to every category. This time it was for aspirants with higher educational qualifications. We wanted to just let people know through such job fairs that the administration is determined to provide high-end jobs also to suitably qualified youths,” said Aditya Rana and Mangesh Sood, career councillors in DBEE.

One of the aspirants, Kamandeep Singh, who was hired in HDFC Bank as a relationship manager with an annual package of around Rs 6 lakh, said that the job fair was a great experience as everything was well organised for the convenience of candidates by the administration.

“I was working at a bank after doing an MA in Political Science. On the basis of my banking experience there, I got a good package here,” he said.

Baljit Kaur, who was offered jobs by four companies, has an MBA (Marketing) from Guru Nanak Dev University, Amritsar. “This job fair was a big opportunity for candidates. It also proved that if you are good in your respective field, then there is always a handsome employment opportunity waiting for you,” said Kaur, adding that such job fairs must be organised across every district of the state so that more unemployed youths got the opportunity to work for big companies.