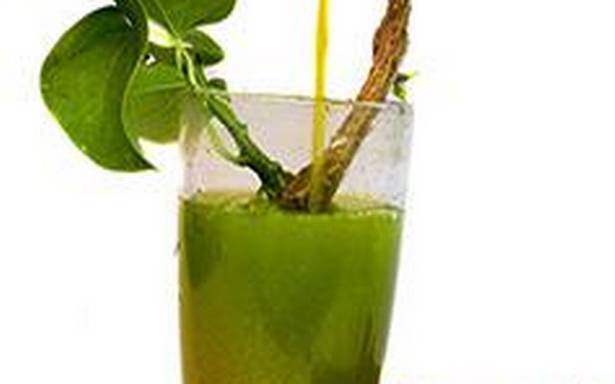 People have long used it to treat a wide range of issues, including fever, infections, diarrhoea and diabetes

Giloy or Guduchi (Tinospora cordifolia), a popularly known herb, is safe to use but similar looking plants in circulation such as Tinospora crispa can be harmful, according to the Ministry of Ayush.

Giloy is a climbing shrub and an essential herb in Ayurvedic medicine. All its parts are thought to have health benefits. People have long used it to treat a wide range of issues, including fever, infections, diarrhoea and diabetes.

In a statement, the Ministry said it had recently noticed safety concerns on use of Guduchi that were published in social media and in some scientific journals.

The Ministry noted in an advisory that there were a good number of studies published in peer-reviewed indexed journals to substantiate the safety and efficacy of Guduchi.

It explained that Guduchi’s hepato-protective properties were well established. It was known for its immense therapeutic applications and the practices were regulated in accordance with various applicable provisions.

“It is observed that different species of Tinospora are available and only Tinospora cordifolia should be used in therapeutics, whereas similar looking species like Tinospora crispa may manifest adverse effects. Thus, it is reiterated that Guduchi is a safe and effective Ayurveda medicine, however it is advisable to use it in consultation with a qualified, registered Ayush physician,” the statement said.

The Ministry had a well-established system of Pharmacovigilance (for reporting of suspected adverse drug reactions from Ayush medication), with its network spreading across all over India, it pointed out.

“ If any suspected adverse event occurs after intake of Ayush medicine, it may be reported to the nearby Pharmacovigilance centre through an Ayush physician,” it observed, adding that it was advised to take Ayush medicine and treatment under the supervision and consultation of a registered Ayush physician only.