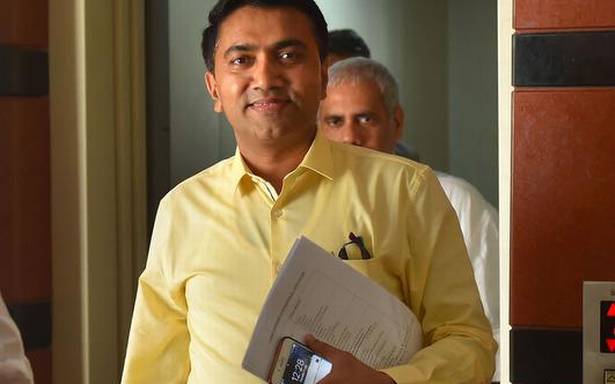 ‘By raking up issue of rebuilding temples, Sawant trying to divert attention from failures’

AAP Goa spokesperson Valmiki Naik on Monday said that by raking up the issue of temples destroyed by the Portuguese, Mr. Sawant was trying to distract attention away from the BJP’s failure in providing jobs, access to education and ensuring health services for the Goans.

Last week, Mr. Sawant said “temples destroyed by the Portuguese need to be rebuilt to preserve Hindu culture”, which led to flak from several opposition parties, including the Congress.

“We Goans have always celebrated all festivals in harmony, be it Hindu festivals, or Eid or Christmas … people are asking why is Mr. Sawant raising such an issue [of rebuilding destroyed temples] two months before the elections … The answer is that people in Goa are not getting jobs, and that roads and the medical infrastructure are in shambles. Since the BJP does not have an answer to all these questions, it is diverting the public attention by raking up such non-issues,” Mr. Naik said.

The AAP spokesperson said Mr. Sawant’s remarks were a clear indication that the BJP had nothing but a blank slate to show the public ahead of the polls.

Mr. Naik said: “The point arises as to why did the thought of rebuilding these destroyed temples not occur to the BJP these last 10 years when its government was in power. We condemn Mr. Sawant’s statements and let the Chief Minister give answers to burning questions of the day rather than rebuilding temples.”

AAP leader Amit Palekar said the BJP ought to stop dividing people on the basis of religion and try resolving vital issues affecting people such as high electricity bills and the problem of garbage dumping, which were destroying the heritage of Old Goa.

However, Mr. Sawant hit back at the AAP and the Trinamool Congress, accusing both the parties of ‘banner pollution.’ He said AAP and Trinamool activists were defacing Goa by pasting propaganda leaflets on public and private property.

Mr. Sawant said in a series of tweets that he had directed the authorities to act against those who pasted the stickers.

“One of the key differences Goa is witnessing in this election is the banner pollution started by the parties of Arvind Kejriwal and Mamata Banerjee. Pasting stickers on public and private property is blatant disregard for authorities as well as Goa’s beauty,” tweeted Mr. Sawant.

“Some of them are already facing complaints for defacement of public property. I have asked the authorities to deal with such menace strictly. I am confident that Goans will reject such forces in the upcoming elections,” the Chief Minister said in another tweet.