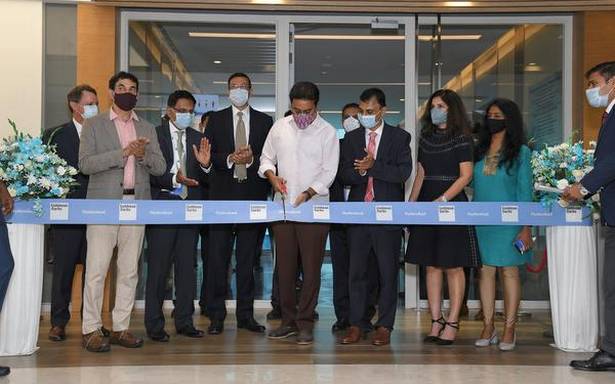 Investment banking major Goldman Sachs has expanded its global centre for engineering and business innovation in India with the opening of an office in Hyderabad, a facility for which over 2,000 employees are to be recruited within about 30 months.

Located at Salarpuria Sattva Knowledge City, in Madhapur, the nearly 1.60 lakh sq ft, 1,300 seater facility, coming up across three floors, is set to emerge as a centre of excellence for consumer banking services, business analytics and platform engineering, including application of emerging technologies such as Artificial Intelligence and Machine Learning.

The vision is to make the Hyderabad office the best in class Global Competency Centre (GCC), said Gunjan Samtani, Head of Goldman Sachs Services, the entity under which the new facility as well as those in Bengaluru come.

Briefing media, after inauguration of the facility by Industries and IT Minister K.T.Rama Rao, he said the plan is to have a headcount of 2,500 for the Hyderabad office by 2023. Launched remotely in March, the Hyderabad operations now has about 250 employees, including new hires and internal relocations from Bengaluru. By end of 2021, the Hyderabad office is expected to have 800 employees of which about 70% employees will be new hires, a release said.

“Our new office in Hyderabad will serve as a crucial innovation hub for a wide range of our businesses and enhance our reputation as a global firm… abundance of talent in Hyderabad made it the obvious choice for our next location,” said Chairman and CEO of Goldman Sachs David M. Solomon, who participated virtually in the inauguration.

Mr. Rao said Hyderabad is emerging as a key investment destination for the Banking, Financial Services and Insurance (BFSI) industry and home to the facilities of several Fortune 500 firms, which is a pointer to the strength of the innovation ecosystem nurtured by the State government. Goldman Sachs not only decided on Hyderabad after evaluating multiple locations, but also opted to launch a bigger operation than with the 500 employees it initially planned, the Minister said, attributing it to the government response, availability of talent pool, infrastructure of the city.

Noting that over 1.80 lakh people are employed in the BFSI entities in the city, he said Goldman Sachs like many others who have invested in Hyderabad was likely to meet its hiring targets well ahead of the timeline.