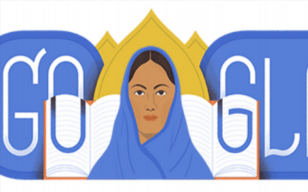 Fatima Sheikh played an instrumental role in co-founding one of India’s first school for girls, alongside Jyotirao and Savitribai Phule.

Google on January 9, 2022, honoured educator and social reformer Fatima Sheikh, on her 191st birth anniversary with a doodle on their homepage.

Sheikh who according to a statement by Google is regarded to be “India’s first Muslim woman teacher,” played an instrumental part in co-founding the Indigenous Library alongside Jyotirao and Savitribai Phule in 1848.

In Pune, Sheikh along with her brother Usman offered their home to the Phules, who had been evicted for attempting to educate people from the lower castes. Sheikh’s home served as the place where Indigenous Library—one of the first school for girls in India was born.

“Here, Savitribai Phule and Fatima Sheikh taught communities of marginalized Dalit and Muslim women and children who were denied education based on class, religion, or gender,” Google said.

Sheikh took an active role in Phules’ Satyashodhak Samaj (Truthseekers’ Society) movement, by going “door-to-door to invite the downtrodden in her community to learn at the Indigenous Library and escape the rigidity of the Indian caste system.” Google describes Sheikh as someone who persisted, despite facing great resistance and humiliation from members of dominant caste.

Calling Sheikh’s story “historically overlooked,” Google stated that the Indian government made efforts to highlight her achievement in 2014, by “featuring her profile in Urdu textbooks alongside other trailblazing Indian educators.”