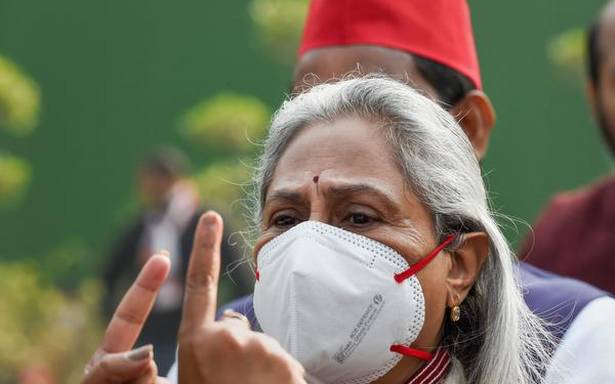 To a question about central agencies’ action against her party leaders, she said, “They (government) are jittery.”

Samajwadi Party MP Jaya Bachchan on Tuesday claimed that the recent Income Tax raids on some of her party colleagues were linked to the ruling BJP feeling "jittery" ahead of the assembly polls in Uttar Pradesh.

She also scoffed at the government’s claim that the central agencies work independently, saying if "we are illiterate, uneducated" to believe it.

Her statement was being recorded under the provisions of the Foreign Exchange Management Act (FEMA), official sources had said.

Ms. Jaya Bachchan, however, made no direct remarks about the questioning of her daughter-in-law.

To a question about central agencies’ action against her party leaders, she said, "They (government) are jittery. They have many instruments and are misusing them… ‘Hawa badi karari hai, lal topi sab pe bhadi ha’ (Wind is blowing sharply. Red cap rises above everyone else)". Red caps are politically associated with the SP whose members often wear it in their programmes.

Speaking to reporters, the wife of Hindi film megastar Amitabh Bachchan also slammed the government for the suspension of 12 Rajya Sabha members of different opposition parties and accused it of not allowing discussion in Parliament on important issues like price rise, unemployment and farmers’ concern.

During the discussion on a bill in Rajya Sabha on Monday, Ms. Bachchan had expressed her anger at some "personal" remarks made against her and lashed out at the BJP with a "curse" that it will soon face bad days.

An agitated Ms. Bachchan also told the Chair that it should be fair and alleged that an attempt was being made to stifle the voice of opposition.

She told reporters on Tuesday that she only gave voice to her heartfelt feelings and as an expression of solidarity with the suspended members, who have been staging a sit-in daily near Mahatma Gandhi’s statue in the Parliament House Complex.

They (government) are selling the country, and opposition cannot even raise it voice, she said in an apparent reference to disinvestment of public sector firms.