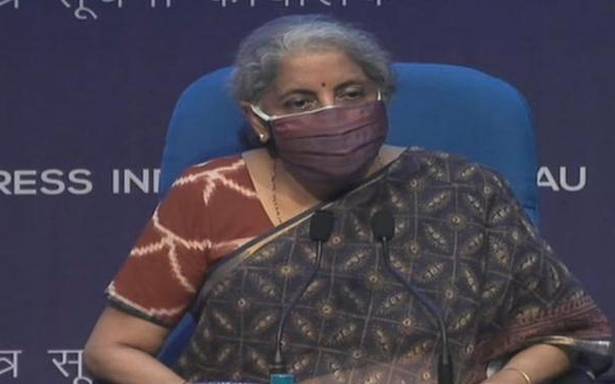 Group of Ministers to meet, recommend rates for individual items.

The Goods and Services Tax (GST) Council failed to agree on immediate tax breaks for critical pandemic relief supplies, including COVID-19 vaccines, and constituted a Group of Ministers to recommend individual items’ tax rates by June 8.

Union Finance Minister Nirmala Sitharaman, chairing the Council’s first meeting in nearly eight months on Friday, said there were protracted discussions with ‘varying viewpoints’ on the taxation of COVID-related items and these dominated the over eight hour-parley between States and the Centre.

“So I have decided and announced a group of ministers to submit a report within ten days so that if there are any further reductions that need to be done, will be done,” Ms. Sitharaman said. Opposition States, including West Bengal, Kerala and Punjab, have been demanding that the GST levied on COVID-related items be scrapped.

The Minister added that revenue implications were not driving the rate cut reluctance, rather the question of whether GST relief on such items will benefit the common man. Technical panels reviewing the rates have found that there will be a ‘collateral impact’ of rate cuts on other items, she explained.

“If we are quick to say that the Centre has no compassion, I have nothing to say. Ultimately, we are all responsible for our citizens’ welfare. I humbly submit that the interest of all the States and the Centre is towards making sure that Indians get the vaccine on time and the States get their fair share of revenues in time,” she asserted.

The Council did, however, agree to extend the GST exemption granted on relief material received free from abroad for donations to State-approved entities, to those who want to make such donations by purchasing the material from overseas. The period for availing this exemption has also been extended to August 31.

“With the rising cases of Black Fungus, a particular medicine required for it — amphotericin-B — has also been included in the exemption list (for tax-free imports),” Ms. Sitharaman told reporters.

On the Delhi High Court setting aside the 12% GST levy on imports of oxygen concentrators for personal use, Revenue Secretary Tarun Bajaj said the order has led to a situation where GST levies will be zero if the item is received as a ‘gift’, but 28% if purchased from abroad.

“The HC has ordered that if it is received as a gift, there will be no tax. While the notification has been set aside that was issued by us, which has resulted that if you buy from outside and bring it yourself, you are taxed at 28% which had actually been brought down to 12%. So inadvertently, what has happened is that because of this confusion, that tax has become 28%. But that will be taken care of by the GoM,” he said.

Industry was broadly disappointed with the outcomes. "There were no major announcements and the issue of GST reduction on COVID items has been deferred by a few more days which is disappointing. The Council has failed to address major pain points of the industry and the common man resulting from the pandemic,” said Rajat Bose, Partner, Shardul Amarchand Mangaldas & Co.

A special session of the Council will be held to discuss with States how long the Compensation Cess levied under the GST regime needs to be extended beyond its current sunset date of July 2022, Ms Sitharaman said.

For this year’s estimated shortfall in compensation cess collections to meet States’ dues, the Centre will raise ₹1.58 lakh crore to recompense States via back-to-back loans, like it was done last year.

The same formula adapted last year will be adopted this year. A rough estimate is that the Centre will have to borrow ₹1.58 lakh crore and lend it to States on a back-to-back basis.