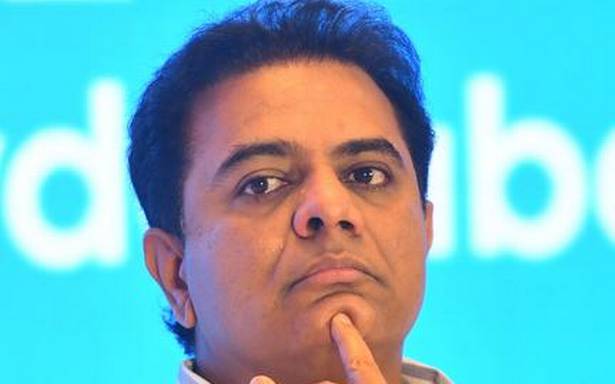 Vaccination progressing at a brisk pace, says the Miister

Asserting that there was no scarcity of medical essentials relating to home isolation kits being provide free of cost to people, Municipal Administration Minister K.T. Rama Rao said the State had stocks of Remdesivir and other medicines to meet current requirements even as steps had been initiated to secure additional quantities of essential medicines.

Discussions were on with manufacturers of the vaccine and other medicines required for treating Coronavirus (Covid-19) patients and the government was trying to ensure effective coordination in getting adequate quantities to meet the requirements. Mr. Rama Rao spoke to reporters after chairing a meeting of the task force constituted on Covid-19, which was attended by Chief Secretary Somesh Kumar and other senior officials.

He said the meeting discussed the existing situation, including availability of medicines, bed strength and other infrastructure-related issues. There were more than 92 lakh people above 45 years in the State, of which, 38 lakh had already availed of the first dose of the vaccine. Close to 10 lakh people, including frontline warriors, were administered two doses of vaccination so far and the administering vaccine was progressing at a brisk pace.

There was no shortage of home treatment kits that were being provided to people as part of the door-to-door survey under way while the government was assessing the use of oxygen as well as doses of injections available. “More than 60 lakh households have been surveyed so far as part of the survey, which is yielding fruitful results,” he said.

The government had resolved to monitor the use of oxygen by government as well as private hospitals and details of injections and other medical essentials that were being used were being collected on a daily basis. Availability and use of medicine like Tocilizumab was also being assessed by officials while the government was constantly monitoring the reports related to black fungus.

He lamented that an audit of oxygen revealed that private hospitals were using more oxygen than that was required while they were also procuring drugs in quantities over and the above the requirements. This was leading to artificial scarcity and the government was committed to avoiding such a situation. The director of public health had been in constant touch with private hospitals in this regard advising them to utilize only prescribed quantities of medical essentials.

He said the task force met for the first time on Wednesday and it would meet regularly henceforth. It was resolved to hold discussions with manufacturers of vaccine and medicine essentials in the coming days to ensure that the State met its requirements. The task force, he said, received suggestions on setting up a single helpline number across the State and steps had been initiated in this direction.